BLACK MUSIC MONTH SPOTLIGHT: Funkadelic, ONE NATION UNDER A GROOVE 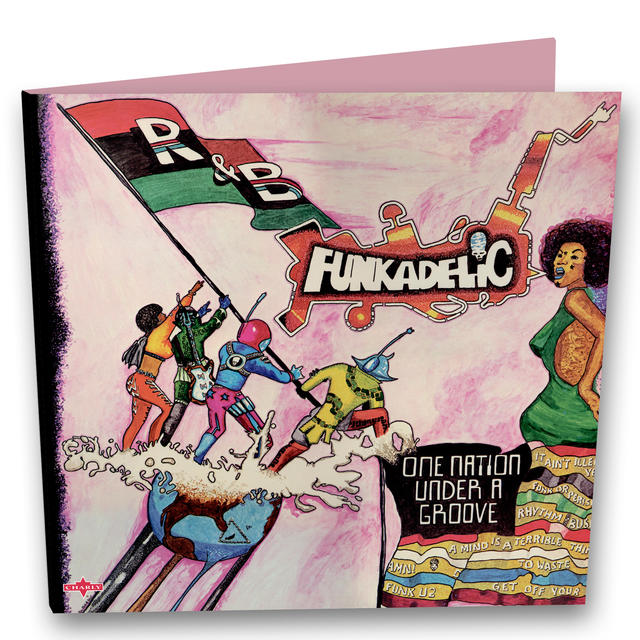 It's a pair of young Funkadelic fans in Chocolate City credited with lighting the spark that launched One Nation Under a Groove: "We'd played a gig in Washington DC and afterwards two young girls, LaTanya and Darlene, came up to the car and told us it was was the best concert they'd ever seen," bandleader George Clinton told Guardian in 2018. "They said: 'It was like one nation under a groove.' As soon as I heard that, I knew it had to become a song. Initially, all I had was a hook - 'One nation under a groove, gettin' down just for the funk of it.' In the studio, once we got a rhythm together, I pretty much ad-libbed the rest. I wanted the silky feel of the Dionne Warwick records with Burt Bacharach - a smooth groove, but funky."

Convening the Funkadelic crew in Detroit's United Sound recording studio, Clinton and company had some fresh energy while making the record: "Junie Morrison [keyboards] had just joined us from the Ohio Players and we'd got lots of new equipment, so we were in the zone. At the time, I had three bands - Parliament, Funkadelic and Bootsy’s Rubber Band - that were all basically the same people," he added. "That gave us a better chance of survival. One Nation could have been a Parliament record, but Funkadelic needed a hit. The guitar solo made it more Funkadelic."

Released on September 22, 1978, One Nation Under a Groove was a smash, going on to become Funkadelic's most commercially successful album. The record crashed the Billboard 200, peaking at #16 for the week of November 25, 1978. The #1 album in America that week: Billy Joel's 52nd Street.

"I credited Darlene and Tanya on the One Nation Under a Groove album cover," George Clinton said of the young fans that inspired the timeless hit. "For me, the song was about bringing humanity together, because the real problems are gonna come when we're dealing with other planets and we have to worry about aliens coming to eat us or f-ck us with five d-cks."

May 1977: Parliament Releases LIVE: P-FUNK EARTH TOUR
THIS IS THE ARTICLE BOX TEMPLATE

BLACK HISTORY MONTH SPOTLIGHT: Parliament, FUNKENTELECHY VS THE PLACEBO SYNDROME
THIS IS THE ARTICLE BOX TEMPLATE