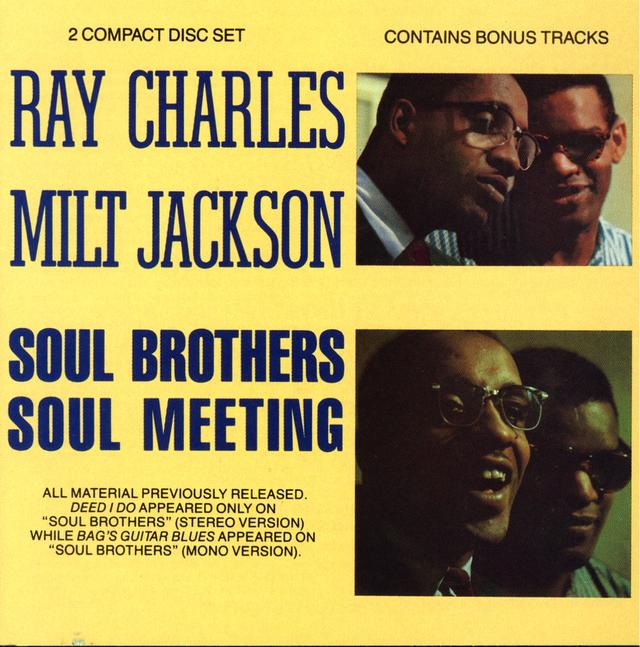 33 years ago today, Ray Charles was inducted into the Rock and Roll Hall of Fame, which would seem to be the perfect time to spotlight some of his most rockin’ hits. Instead, however, we’re going to play the contrarian and take a few paragraphs to remind you about an album he did in the midst of his early success that was actually the jazziest item in his discography up to that point.

Produced by Nesuhi Ertegun, SOUL BROTHERS was – as we’ve already spoiled in the title of this piece – a collaboration between Charles and jazz vibraphonist Milt Jackson, one which came about as a result of Charles happening upon Tom Dowd while Dowd was in the midst of mastered an album by the Modern Jazz Quartet, one of the members of which was – wait for it – the aforementioned Mr. Jackson. Charles informed Dowd, “That Milt Jackson’s got soul,” while Jackson had been telling Ertegun, “No more of this MJQ Mozart Society shit. I’m gonna play the blues with Ray.”

The aforementioned anecdote, by the way, came from Michael Lydon’s book Ray Charles: Man and Music, and there’s more to it:

“Dowd got the piano tuned in the old 23456 studio and waited for Jackon’s vibraphones to arrive. ‘No vibes ever came,’ Dowd remembered with a chuckle. ‘But Milt comes walking in with a guitar on his back and says, ‘Where do I plug this thing in?’ Then Ray comes in with an alto case and he says, ‘I ain’t playing piano tonight, I’m playing sax.’”

In the end, both musicians also played the musicians for which they were generally most acclaimed, and the result was an album on which – per Lydon – “the jazz tracks simmer like a slow-cooking stew [and] the R&B tracks explode like musical dynamite.”