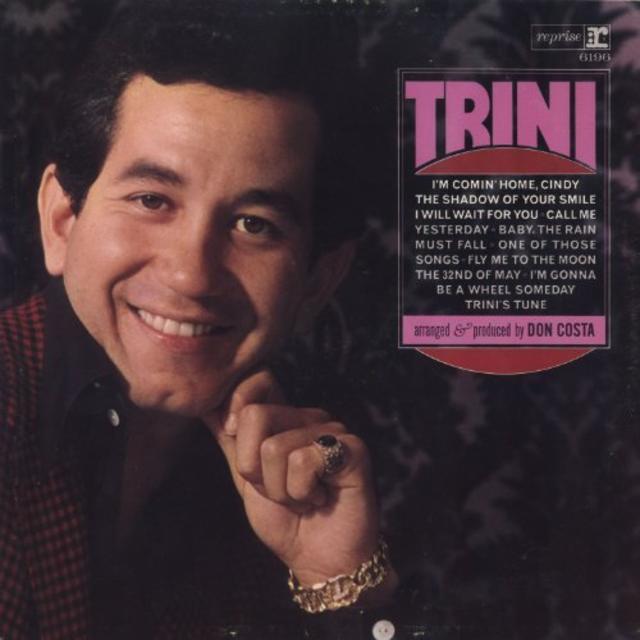 52 years ago this month, Trini Lopez released his 12th album on Reprise Records, which is an impressive accomplishment by itself, but it’s made even more so by the fact that Lopez’s stint on the label only started in 1963!

TRINI was produced and arranged by Don Costa, whose other credits included work with Paul Anka, Steve Lawrence and Eydie Gorme, and Ferrante and Teicher, but he’d been working with Lopez for several years by that point. (It’s probably not a coincidence that their first collaboration took place in 1963, which was, as we noted in the opening paragraph, the same year Lopez kicked off his association with Reprise.) The album featured Lopez putting his own spin on a number of already-familiar tunes, including “Fly Me to the Moon,” “Baby, The Rain Must Fall,” “The Shadow of Your Smile,” and – lest anyone accuse him of not being contemporary – The Beatles’ “Yesterday.”

While TRINI didn’t prove to be a fount of hits for Lopez, it did at least result in one top-40 track: “I’m Comin’ Home, Cindy,” which made it to #39 on the Billboard Hot 100 before starting its descent. In fairness to Lopez, however, it was a very strange time in popular music, one where you never knew who was going to be your competition, as evidenced by the fact that the week TRINI debuted on the Billboard 200, it was in competition with MRS. MILLER’S GREATEST HITS.

We don’t know about you, but on the whole, we’d rather listen to TRINI.