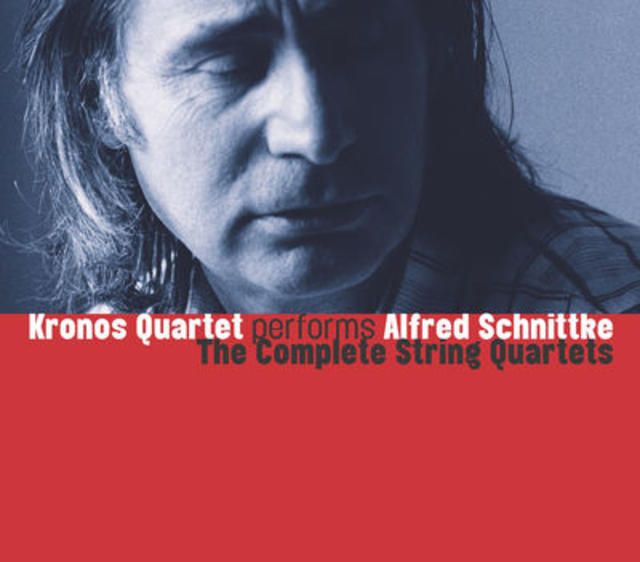 20 years ago today, the Kronos Quartet released a tribute to a noted Russian composer which can best be described as “startling.” That’s not a critique of the Kronos Quartet, mind you, but a descriptor of the string quartets they’re performing on the LP.

Produced by Judith Sherman, KRONOS QUARTET PERFORMS ALFRED SCNITTKE: THE COMPLETE STRING QUARTETS has a decidedly self-explanatory title, particularly if you’re familiar with Schnittke’s work. Born in Engels, a city in the Volga-German Republic of the Russian SFSR, Schnittke was an acclaimed composer, but his work wasn’t exactly beloved by the Soviet bureaucracy. On the other hand, the members of the Kronos Quartet thought it was darned swell, hence their decision to record these four quartets.

“String Quartet No. 3” was recorded and released in 1988, while the other three were recorded between 1994 and 1996, but it wasn’t until 1998 that all four of them found their way onto a single release. When the All Music Guide examined the collection, they lavished it with praise.

“Schnittke's music is dense and emotionally extreme, powerful and at times angry. The Kronos Quartet handles the material with a mastery we have come to expect from this fine ensemble. After hearing many CDs in which Kronos is amplified, it is refreshing to know that their acoustic sound and technique are just as nuanced as ever. And they have the unique ability to make difficult music--which in other hands might sound dry and academic--so incredibly hip. Angular, intense Schnittke never sounded better.”

Although this is certainly a considerable compliment, perhaps the greatest praise came from the closing line of the New York Times’ reflections on the album: “The Kronos Quartet has delivered a performance in which every phrase is filled, if not with grief, with profound and resonant meaning.”

Rhino’s Got You Covered: Faster Pussycat, Gene Vincent, Kronos Quartet, and Echosmith
THIS IS THE ARTICLE BOX TEMPLATE