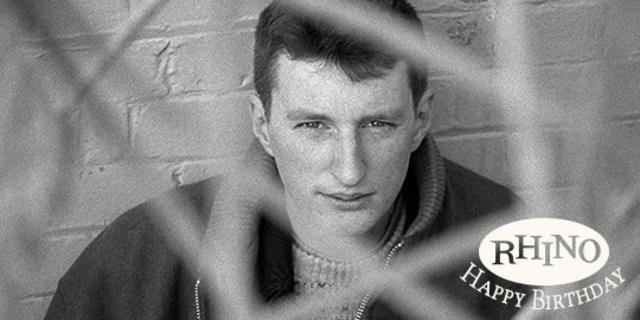 They call him the big-nosed bard of Barking – no, seriously, go Google the phrase and see who comes up – but most people just refer to him as Billy Bragg, and today he hits the big 6-0. In celebration of his career, please enjoy the opportunity stream MERMAID AVENUE: THE COMPLETE SESSIONS, his well-received Woody Guthrie collaboration with Wilco, but in addition to those tunes, we’ve also pulled together a six-pack of tracks which feature Bragg working with other groups or singers.

1. Riff Raff, “I Want To Be A Cosmonaut” (1978): Before he became a solo singer-songwriter, Bragg founded the punk / pub rock band Riff Raff with his neighbor, Philip Wigg, better known to music fans as Wiggy. This was their first single, which was released on Chiswick Records, and they released several more over the next year or so, but they ultimately disbanded in 1980, at which point Bragg went solo.

2. Norman Cook, “Won’t Talk About It” (1989): In the brief window between his departure from The Housemartins but before he formed Beats International, Norman Cook released a single under his own name, “Blame It On The Bassline.” While not a massive hit, it climbed to #29 on the UK Singles chart, which gave this song – the B-side – a bit of extra exposure.

3. 10,000 Maniacs, “Party of God” (1989): Natalie Merchant turned up in the studio when Bragg and Wilco joined forces for their MERMAID AVENUE collaborations, but she and Bragg had worked together quite some time earlier. This track was a B-side to 10,000 Maniacs’ single “Trouble Me.”

4. Kirsty MacColl, “Darling, Let’s Have Another Baby” (1991): Originally popularized by the singer Johnny Moped, this cover was recorded by longtime friends Bragg and MacColl during a session with Nicky Campbell. It ended up finding a home on MacColl’s 1991 single “Walking Down Madison.” Keep your ears open: the best bit comes a few seconds before the 2:00 mark, when MacColl starts giggling.

5. R.E.M., “Tom’s Diner” (1991): When R.E.M. came to Charleston, West Virginia to record an episode of the radio show Mountain Stage, they had a lot of other great folks on the bill, including Bragg, Robyn Hitchcock, and Clive Gregson and Christine Collister. They also found themselves indulging in a number of fun covers, including this Suzanne Vega number, on which you can hear Bragg’s distinctive voice.

6. Joe Henry, “Dark As A Dungeon” (1994): For anyone who’s enjoyed SHINE A LIGHT, the recent collaboration between Henry and Bragg, now you can hear what these two like-minded musicians and friends sounded like when they were collaborating 20+ years earlier.