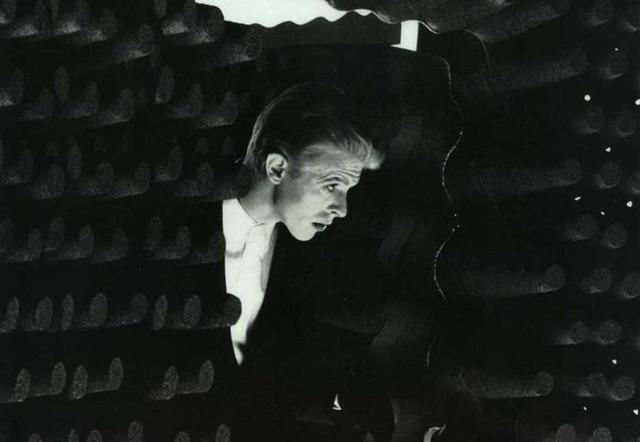 It's the album David Bowie famously said he had absolutely no recollection of recording: "I know it was in LA because I've read it was." Due, in large part, to a rampant cocaine addiction that had the singer holed up in a rented house in Bel-Air neighborhood of L.A., burning black candles, dabbling in the occult, and staying awake for days. He spent much of his time down in the Fairfax district, running marathon recording sessions at Cherokee Studios.

“When we were in work mode, it was always about the work,” guitarist Carlos Alomar told Rolling Stone in 2017. “If it was fueled by coke or by whatever, David was always able to manage the decision-making. And it was always the same concern for him: ‘What are the lyrics, and what am I going to talk about?’"

Alomar, along with bassist George Murray and drummer Dennis Davis, formed the nucleus of the band that recorded Station to Station, released January 23, 1976. They'd serve as Bowie's band for the rest of the 1970s.

Guitarist Earl Slick, also among the musicians who worked on the album, discovered Bowie's dedication to the recording sessions during a fateful night out on the Sunset Strip: "We didn’t even have the studio booked, and I was at the Rainbow Bar and Grill,” he told Rolling Stone. “As we used to say, I was ‘under the weather.’ Suddenly, one of the roadies comes in. They search the whole place and find me at a back table. He says, ‘Time to go to work.’ I say, ‘It’s one in the morning, and I’m drunk.’ He says, ‘That’s OK. David’s at the studio. There’s a car outside.’ So I paid my tab, jumped in the car and worked all night. I mean, that was not an unusual thing to happen.”

"I got some quite extraordinary things out of Slick," Bowie told Kurt Loder in the liner notes for the Sound + Vision box set. "I think it captured his imagination to make noises on guitar, and textures, rather than playing the right notes."

Bowie had just finished making the film The Man Who Fell to Earth, and with the breakout success of his 1975 album, Young Americans--featuring the singer's first #1 hit in America, "Fame"--was given more creative control in the direction of Station to Station. The result was an LP comprised of just six songs, opening with the 10-minute opus that is the album's title track, the introduction to new persona, "The Thin White Duke." Influenced by electronic acts such as Kraftwerk, the song--and the album--found Bowie exploring even more esoteric and experimental avenues in his music.

With all of the experimentation going on, the album's first single was a return to the cool funk that propelled "Fame" to the top of the charts: "Golden Years." Another crossover hit at radio, the tune cruised up the Hot 100 to peak at #10 for the week of April 3, 1976.

The second single from Station to Station was the woozy but infectious "TV15," an inventive mix of throwback 1950s rave-up energy with modern production and an ominous drone. Powered on a bouncing piano track provided by Roy Bittan of Bruce Springsteen's E Street Band, the track was too unusual for the charts, still managing to reach #64 on the Hot 100 on June 5, 1976. Critic Robert Christgau called it his "favorite piece of rock and roll in a very long time."

Station to Station was definitely a hit with the critics; even notorious Bowie crank Lester Bangs was charmed, praising the record's "beautiful, swelling, intensely romantic melancholy", and dubbing it as Bowie's "(first) masterpiece" in his review for CREEM magazine.

Augmented by dance floor jams like "Stay," it's an acoustic cover ballad that provides the album's emotional center: "Wild is the Wind," inspired after Bowie met and befriended singer Nina Simone, who recorded a version of the song in 1966: "Her performance of ["Wild Is the Wind]" really affected me," Bowie told writer Nicholas Pegg. "I thought it was just tremendous, so I recorded it as an homage to Nina." (“He’s got more sense than anybody I’ve ever known,” Simone said of Bowie. “David ain’t from here.”)

Like the critics, fans were smitten with Station to Station, snapping up enough copies to send the LP to peak at #3 on the Billboard 200 for the week February 28, 1976. The #1 album in America that week: Bob Dylan, Desire. At #2: Paul Simon, Still Crazy After All These Years.

Single Stories: David Bowie, ASHES TO ASHES
THIS IS THE ARTICLE BOX TEMPLATE