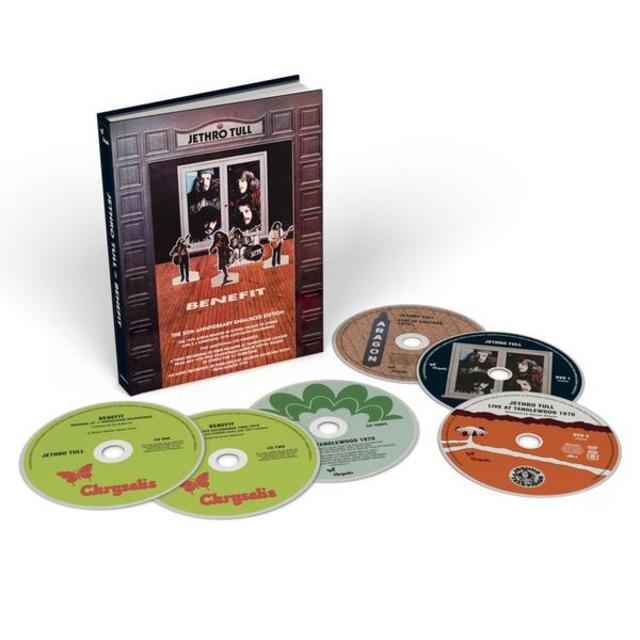 Jethro Tull's 1970 classic Benefit will be celebrated in a brand-new 4CD/2DVD set, featuring remixes by Steven Wilson, an abundance of previously unreleased material, packaged within a deluxe hardback book, containing 100 pages of commentary from numerous contributors alongside hordes of images of the band creating and performing their first million-selling album. After pandemic-enforced delays, Benefit (The 50 Anniversary Enhanced Edition will finally be released on November 5, 2021.

Benefit (The 50 Anniversary Enhanced Edition contains a copious amount of expanded material, building upon the 2013 Steven Wilson remixes. CD3 delivers a previously unreleased Steven Wilson remix of Jethro Tull performing at Tanglewood in 1970, while DVD2 has the previously unavailable film footage of that show. Further to that, CD4 contains a newly remastered mono version of a previously unreleased concert at The Aragon Ballroom in 1970. The 100-page book, enclosed within the elegant, hardback book packaging, contains an essay from Martin Webb, who expands upon the 2013 "A Collector's Edition" booklet notes. Following that are comments on each of the album's tracks from Ian Anderson, Martin Barre, Glenn Cornick, and Clive Bunker, as well as interviews with Robin Black (studio engineer of Benefit and many other Jethro Tull albums), Terry Ellis ('executive producer' of Benefit), Joshua White who directed the 1970 Tanglewood Festival which features on DVD2, and Steven Wilson explaining the mixing of Benefit in 2013. The masses of anecdotes are surrounded by legions of images of the band and memorabilia from the era.

For more details and pre-sale: Benefit (The 50 Anniversary Enhanced Edition

OUT NOW: Jethro Tull, A
THIS IS THE ARTICLE BOX TEMPLATE