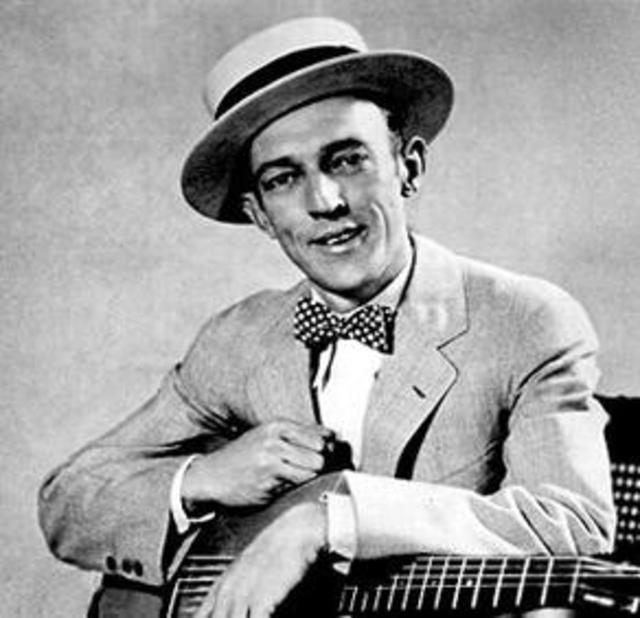 Inductee: Jimmie Rodgers (vocals, guitar; born September 8, 1897, died May 26, 1933)Jimmie Rodgers was the first figure inducted into the Country Music Hall of Fame and is fondly referred to as the "Father of Country Music." Yet his combination of blues and hillbilly styles made him a true forebear of rock and roll, and he was also part of the first group of musicians inducted into the Rock and Roll Hall of Fame. Jimmie Rodgers was born in Meridian, Mississippi, in 1897. At the age of 14, Rodgers began working on the M&O Railroad as a water boy. He had already started playing banjo and guitar, and he picked up blues influences from the black workers on his crew. He then worked as a brakeman for New Orleans and Northeaster Railroad until, at the age of 24, he contracted tuberculosis and was forced to quit his job.He had already been performing in various places, but after leaving his job he turned to music full time. Initially, he was a black-face performer in a medicine show. Then, in 1926, he appeared as a yodeler, and, later that year, he formed the Jimmie Rodgers Entertainers. After that group broke up, he signed a solo deal with Victor Records. In 1927, he released "The Soldier's Sweetheart" and "Sleep, Baby, Sleep." Then, in November, Rodgers recorded four more songs for Victor, including "Blue Yodel," also known as "T for Texas." That record sold a million copies and made Rodgers the first country superstar. Rodgers toured the country, selling out shows in nearly every city he played. "Brakeman's Blues," recorded in 1928, also sold a million copies, and the following year he filmed The Singing Brakeman for Columbia Pictures. The short film's title became his nickname. In 1930, he recorded "Blue Yodel No. 9" with Louis Armstrong on trumpet and Armstrong's wife, Lil Hardin Armstrong, on piano. Overall, Rodgers recorded 110 sides for the Victor label.Rodgers' records continued to sell well during the Depression, but his health was deteriorating as a result of the tuberculosis. He had his last recording session in New York City on May 24, 1933, but he was so weak he had to rest on a cot between songs. His final song, "Fifteen Years Ago Today," was recorded at that session. He died two days later from a pulmonary hemorrhage. He was only 35 years old.Jimmie Rodgers' mix of Appalachian hill ballads, black spirituals, rural blues and white pop music served as a blueprint for what would become rock and roll. No less a kindred spirit than Bob Dylan had this to say in the liner notes to the Jimmie Rodgers tribute album that became the first release on Dylan's Egyptian Records in 1997: "Jimmie Rodgers, of course, is one of the guiding lights of the Twentieth Century, whose way with song has always been an inspiration to those of us who have followed the path....He was a performer of force without precedent with a sound as lonesome and mystical as it was dynamic. He gives hope to the vanquished and humility to the mighty."In addition to being inducted into both the Rock and Roll Hall of Fame and the Country Music Hall of Fame, Rodgers was inducted into the Songwriters Hall of Fame in 1970. Numerous artists have cited Rodgers as an influence, and many, including Van Morrison, have mentioned him in their songs. In 1978, the U.S. Postal Service issued a Jimmie Rodgers commemorative stamp. And in 1997, Rodgers was the second artist to be honored as an American Music Master by the Rock and Roll Hall of Fame and Museum.