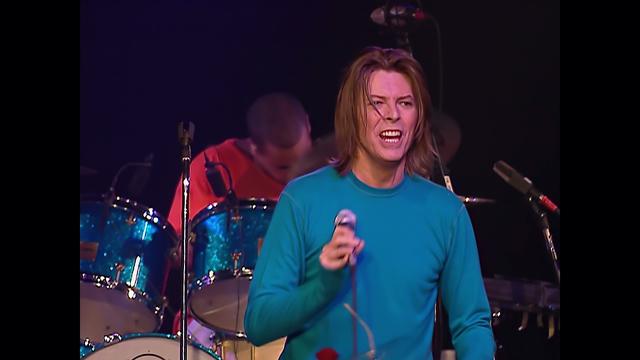 With the release of David Bowie's long-lost Toy album imminent, a teasing taste has arrived in the form of "Can't Help Thinking About Myself." It's a previously unheard re-recording of David Bowie’s 1966 single taken from the forthcoming album which features in the DAVID BOWIE 5. BRILLIANT ADVENTURE (1992 – 2001) and TOY (TOY:BOX) box sets. The studio recording is coupled with a live version recorded at Maida Vale Studios on October 25, 1999 for the Mark Radcliffe BBC Radio 1 Show, exclusive to this single.

“Can’t Help Thinking About Me” was Bowie's first single of three for the Pye label and was resurrected for the first time in over 30 years when he performed it on the VH-1 Storytellers show in August 1999. The song remained on the setlist for the short promotional tour for the 'hours...' album. The previously unseen video for the track was recorded at The Elysée Montmartre in Paris on October 14 that year. The live version of the song was recorded for the Mark Radcliffe BBC Radio 1 show. Radcliffe and his co-presenter Marc Riley remember the day fondly.

"I'm so pleased that this track is being released as it was such a joy and surprise when he included it in his set at Maida Vale that day," Radcliffe recalled. "I remember that occasion so fondly. David was wearing an excellent shirt and was on such great, twinkly form. I recall David dancing with Gail Ann Dorsey to 'I Try' by Macy Gray, which was playing on the radio. I interviewed Gail Ann a year or so ago, and she too remembered that moment vividly. It was one of the few cherished and special days I got to spend with him for which I remain ever grateful."

"The thought of David Bowie doing a session for us was mind blowing to be frank," Riley remembered. "David said to us 'One of you requested we do "Drive In Saturday"?' I gulped. How presumptuous of me! 'Yes David' says I. 'We can do that! Here’s the current live set list, what else do you fancy?' I don't think I've ever moved so fast in my life. Before Mark could lift his hand from his pocket I'd taken the piece of paper from David and let my eyes drop from top to bottom. 'You do "Can't Help Thinking About Me!!!"'' 'We do…do you want that one too?' 'Yes!!!.' The session was incredible and David even gave us an extra tune, a brilliant rendition of 'Repetition' from Lodger."

Listen to the single and live version via Spotify below. Toy arrives on January 7, 2022.