LIVE from Your Speakers: Commander Cody & His Lost Planet Airmen, WE’VE GOT A LIVE ONE HERE! 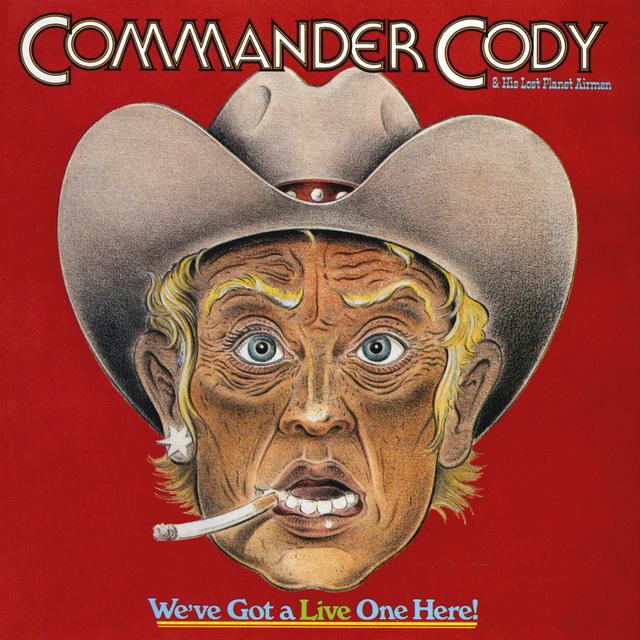 Country music and rock ‘n’ roll often make strange bedfellows, but when the twain meet, it can make for special moments. We’re thinking of events like Willie Nelson’s Fourth of July Picnics or Charlie Daniels Band’s Volunteer Jam shows, where self-styled rednecks, hippies and rockers mingled and enjoyed (or at least tolerated) one another’s company while digging some great music. Or the Grateful Dead’s insertion of Merle Haggard and George Jones songs, among others, into their long, strange sets. Or album projects like the Byrds’ SWEETHEART OF THE RODEO, or even more so, the Nitty Gritty Dirt Band’s WILL THE CIRCLE BE UNBROKEN, on which dudes with long hair paid tribute to more conservatively coiffed country and bluegrass forebears, to almost magical effect.

George Frayne (a.k.a. Commander Cody) hailed from Michigan, of all places, but his band – at least in its original incarnation, from 1967 to 1976 – were the very embodiment of such a country and rock crossover, with a little blues and rockabilly thrown in. The records they made in that stretch can make for some wild listening experiences, and their 1976 live record, WE’VE GOT A LIVE ONE HERE, is no exception.

The Airmen were versatile, to say the least. They could play a tear-in-your-beer country ballad like “Seeds and Stems” – which checks off must-haves like the woman who left, the dog that died, and the house that got repossessed – then get the crowd up and dancing with the barrelhouse “Rock That Boogie.” They could lurch into the Texas Swing of “Milk Cow Blues” or “San Antonio Rose” like Bob Wills was grading their performance, or crank up “Don’t Let Go,” like Jerry Lee Lewis was just offstage, waiting to join in.

Trucker songs were big in the mid-’70s, and the Airmen bring out a fine trio of them, with "Semi Truck," "Lookin' at the World Through a Windshield," and "18 Wheels." No Commander Cody show would be complete without a run through Tex Ritter’s “Smoke Smoke Smoke (That Cigarette),” and the crowd represented here got a good one. And then there’s “Hot Rod Lincoln,” the band’s lone Top Ten hit – a showcase for Bill Kirchen’s wild pickin’ and Frayne’s likewise uninhibited storytelling. This particular performance finds the band baiting the hippies and the country folks equally; it’s a fun trip that could go on a lot longer than its four minutes, and no one would’ve complained.

WE’VE GOT A LIVE ONE HERE is a primo party platter, something you put on at the cookout or the smaller get-together to get guests moving and maybe singing along.

We've Got a Live One Here!