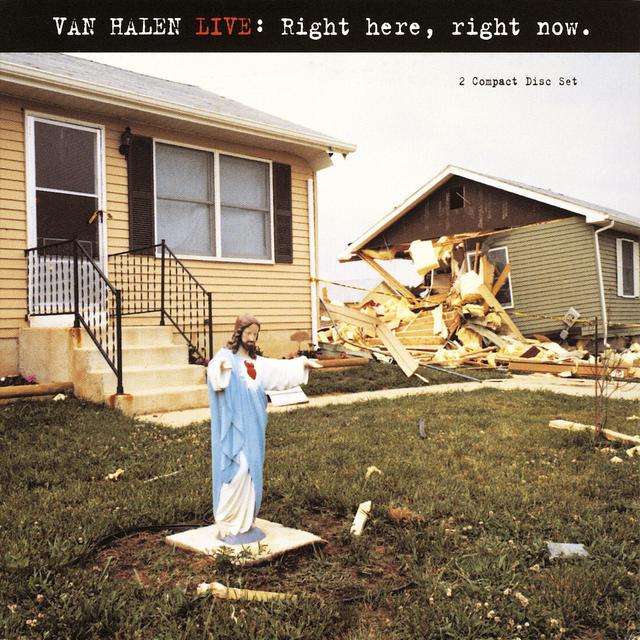 Let’s admit it – most of our most beloved live records have had some studio sweetening performed on them. Some EQ here, a nudge of the vocal level there. Sometimes a guitar might have fallen out of tune, or a vocalist grunts when he should’ve “whoa”-ed” – you fix those things. As Paul Stanley of Kiss once said of his band’s overdubs on the classic ALIVE, “Who wanted to hear a mistake repeated endlessly? Who wanted to hear an out-of-tune guitar? For what? Authenticity?”

When Sammy Hagar reported in his 2011 memoir Red that he and the Van Halen brothers had performed a good bit of post-production work on 1993’s LIVE: RIGHT HERE, RIGHT NOW, there were those who shouted, “Authenticity!” and poo-pooed such tweakening. But does it matter? Ask anyone who saw the band on the 1991 and 1992 shows supporting their album FOR UNLAWFUL CARNAL KNOWLEDGE, and they will tell you the honest truth – It. Doesn’t. Matter. LIVE: RIGHT HERE, RIGHT NOW is a monster album, capturing the Hagar-era Van Halen at its absolute peak.

Guitar aficionados, long used to lauding Eddie Van Halen’s craft, had plenty to celebrate with FOR UNLAWFUL CARNAL KNOWLEDGE, so dense was it with six-string wizardry, more so than just about any other Van Halen record. LIVE: RIGHT HERE, RIGHT NOW features ten of the album’s eleven cuts (why leave out “The Dream is Over?”), a more than heaping helping of that record’s goodness, from the drill-over-the-pickup noise of “Poundcake” to the breakneck “Pleasure Dome” and anthemic “Right Now,” not to mention the show-ending, feel-good “Top of the World.”

But there’s so much more. Van Hagar staples like “Why Can’t This Be Love,” “Best of Both Worlds” and “Finish What Ya Started’ are given energetic workouts; Hagar even gets an acoustic spotlight for his solo hit “Give to Live,” which fit nicely in the VH canon.

David Lee Roth-era tunes are not forgotten – there’s “Jump” (because there has to be “Jump.” It’s the law) and a fierce “Ain’t Talkin’ ‘Bout Love” to crank. Hagar also makes “Panama” his own, with a half-serious, half-hilarious story in the breakdown.

Like most Van Halen records, LIVE: RIGHT HERE, RIGHT NOW is a super-boffo party platter, or a primo slab of rock to put on in the car. If the studio knobs got twiddled a bit to make it sound this good, so be it.