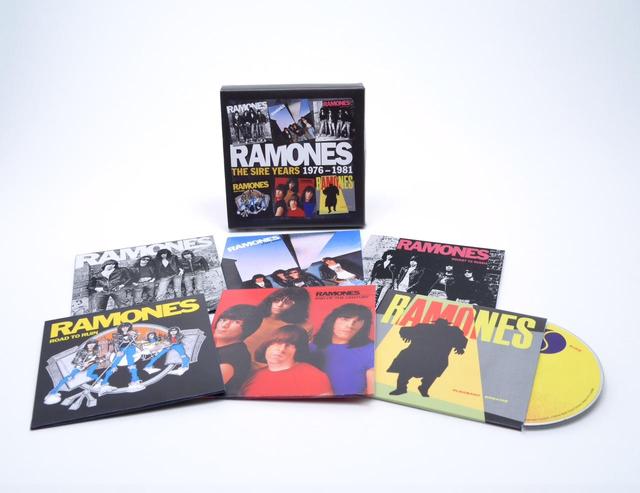 “Hey ho, let’s go!” With that call to arms the Ramones launched their recording career and changed the face of music forever, spawning punk rock and reinvigorating the ailing art form known as rock ’n’ roll. Formed in the Forest Hills section of Queens, NY in 1974, the Ramones were completely original, forging a whole new sound and direction for music and giving birth to punk.

Rhino explores the incomparable footprint of the Ramones’ musical legacy with a boxed set featuring the band’s seminal first six albums. RAMONES: THE SIRE YEARS (1976-1981) includes the band’s 1976 eponymous debut, LEAVE HOME (1977), ROCKET TO RUSSIA (1977), ROAD TO RUIN (1978), END OF THE CENTURY (1980), and PLEASANT DREAMS (1981), each presented with their original running order and artwork. The set will be available on October 29. The set will also be available digitally.

With the 1976 release of their debut album the Ramones issued a manifesto with their groundbreaking sound, inspiring countless others to pick up guitars and rock. RAMONES contains 14 tunes—including classics like “Blitzkrieg Bop,” “Beat On The Brat,” “Judy Is A Punk,” and “I Wanna Be Your Boyfriend”—and runs a tight 32 minutes, thanks to the fact that every song clocks in well under three minutes (and many under two).

The Ramones’ sophomore effort LEAVE HOME saw the band expanding their sound slightly by including more melodic songs like “What’s Your Game,” “Swallow My Pride,” and “I Remember You.” But the chain saw guitars were still sharp in songs like “Glad To See You Go,” “Gimme Gimme Shock Treatment,” and “Pinhead,” with its classic “Gabba Gabba Hey!” chant.

ROCKET TO RUSSIA continued the Ramones’ full-scale assault on the indulgent arena rock of the day with another 14 blistering tracks, including the classics “Sheena Is A Punk Rocker” and “Teenage Lobotomy.” The disc also features the band’s reworkings of “Do You Wanna Dance?” and “Surfin’ Bird.”

The fourth and final Ramones disc of the 1970s, ROAD TO RUIN, was the first to feature a three-minute-plus song, “I Wanted Everything.” The album also contained “I Wanna Be Sedated,” perhaps the best-known Ramones track ever and their signature cover of “Needles & Pins.”

END OF THE CENTURY found the Ramones indulging their love for the sounds of the ’60s with storied pop hitmaker Phil Spector behind the boards for his last commercial release as producer. The “Wall Of Sound” treatment of songs like “Baby, I Love You,” “Danny Says,” and “Do You Remember Rock ‘N’ Roll Radio?” helped make the album the Ramones’ most commercially successful effort ever.

The Ramones followed up with PLEASANT DREAMS in 1981, an album that saw the band letting their pop influences show. Produced by Graham Gouldman (ex-10cc), the disc contains some of the band’s most infectious tracks, including “We Want The Airwaves” “The KKK Took My Baby Away,” and “She’s A Sensation.”