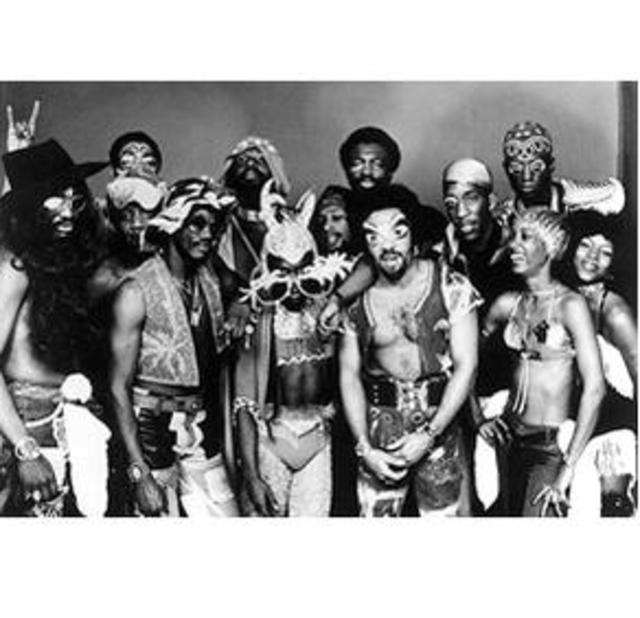 [Photo by Bruce W. Talamon (c) 1977 All Rights Reserved] Inductees: George Clinton (vocals; born July 22, 1940), Jerome "Bigfoot" Brailey (drums; born August 20, 1950), William "Bootsy" Collins (bass, vocals; born October 26, 1951), Raymond Davis (vocals; born March 29, 1940 - July 5, 2005), Tiki Fulwood (drums, vocals; May 23, 1944 - October 29, 1979), Glenn Lamont Goins (vocals, guitar; January 2, 1954 - July 29, 1978), Michael Hampton (guitar; born November 15, 1956), Clarence "Fuzzy" Haskins (vocals; born June 8, 1941), Eddie Hazel (guitar, vocals; April 10, 1950 - December 23, 1992), Walter "Junie" Morrison (keyboards, synthesizers; born tk), Cordell "Boogie" Mosson Jr. (bass; October 16, 1952 - April 18, 2013), William "Billy Bass" Nelson Jr. (bass; born January 28, 1951), Garry Shider (vocals, guitar; born July 24, 1953; died June 16, 2010), Calvin "Thang" Simon (vocals; born May 22, 1942), Grady Thomas (vocals; born January 5, 1941), Bernie Worrell (keyboards, vocals, born April 19, 1944)Under the guiding hand of mastermind George Clinton, the affiliated groups Parliament and Funkadelic established funk as an heir to and outgrowth of soul. If James Brown is funk's founding father, Clinton has been its chief architect and tactician. Over the decades, he's presided over a musical empire that's included Parliament and Funkadelic, plus numerous offshoots (such as the Brides of Funkenstein and Parlet), solo careers (Clinton's and bassist Bootsy Collins' being the notable) and aggregates (the P-Funk All-Stars). The pioneering work of Parliament and Funkadelic in the Seventies-driven by Clinton's conceptually inventive mind and the band members' tight ensemble playing and stretched-out jamming-prefigured everything from rap and hip-hop to techno and alternative. Clinton's latter-day disciples include Prince and the Red Hot Chili Peppers.Between them, Parliament and Funkadelic virtually defined the melting pot known as funk: a melding of rhythm & blues, jazz, gospel and psychedelic rock. With them, Clinton has purveyed larger-than-life characters and concepts from the stage, culminating in such theatrical milestones as the Mothership, a mock flying saucer from which the black space "aliens" of Clinton's musical entourage alighted onstage. Though his musical productions have been typified by danceable grooves and driven by a laser-sharp sociological wit, Clinton's ultimate goal is serious: "I am intent on making the word funk as legitimate as jazz and rock and roll."George Clinton spent his teenage years in Plainfield, New Jersey, where he founded a vocal group called the Parliaments. They recorded as far back as 1956 but didn't impact the charts until 1967, when "(I Wanna) Testify"-a prescient mix of Sixties soul, rock and pop-went #3 R&B and #20 pop. That year, Clinton began listening to the new wave of psychedelic rock by bands such as Cream, Vanilla Fudge and Sly and the Family Stone. The dual influence of cutting-edge soul and rock served as inspirations to Funkadelic. In 1970, Clinton dropped the "s" from his other band, and Parliament was born.Each group had a distinct identity and alternated releases into the late Seventies on a variety of labels-Invictus, Westbound, Warner Bros.-with Clinton dividing his time between them. Parliament was essentially a horn-based soul group and Funkadelic a guitar-based rock group, but both were built on a foundation of funk. Parliament and Funkadelic were flip sides of the same coin, and these overlapping entities' respective outputs were referred to in stylistic shorthand as "P-Funk." In Parliament's self-referential theme song, "P-Funk (Wants to Get Funked Up)," Clinton and entourage referred to themselves as "dealers of funky music, P-Funk, uncut funk, The Bomb."Parliament and Funkadelic frequently resorted to allegorical concept albums to make larger points about societal injustices and ways in which a community of like-minded souls could liberate themselves from its constrictions. Clinton animated the moral conflict between opposing forces of good (the trippy funkateer "Starchild") and evil (the uptight, uptight "Sir Nose D'Void of Funk") over the course of a five-year run of Parliament albums, from Mothership Connection (1975) to Trombipulation (1980). Meanwhile, Funkadelic gelled on one of the finest funk albums ever produced, One Nation Under a Groove, whose title track was a rousing anthem of union and community.Parliament and Funkadelic dominated and revolutionized the music scene in the latter half of the Seventies-particularly in 1978 and 1979, when they racked up four #1 R&B hits: "Flash Light," "One Nation Under a Groove," Aqua Boogie" and "(Not Just) Knee Deep." Clinton's main collaborators during Parliament-Funkadelic's heyday included keyboardists Bernie Worrell and Walter "Junie" Morrison and bassist William "Bootsy" Collins. Known for his star-shaped sunglasses, glittery "space bass" and cartoonish demeanor, Collins became a funk icon and solo star in his own right. Melding soul, funk, jazz and psychedelia, a succession of P-Funk guitarists-including the late Eddie Hazel, Mike Hampton and DeWayne "Blackbyrd" McKnight-have carried forward the legacy of Jimi Hendrix with their adventurous, exploratory soloing.During the 1970s, Parliament, Funkadelic and a host of related offshoots placed roughly 60 singles on the R&B charts and were among the hottest attractions on the concert circuit. They were responsible for some of the most theatrical tours ever undertaken, deploying one of the largest props-the otherworldly "Mothership"-ever dragged from city to city. Financial, legal and personal problems grounded the Mothership in 1980, but Clinton resurfaced stronger than ever as a solo artist on Capitol Records.. "Atomic Dog," the popular dance-funk centerpiece of 1982's Computer Games-one of Rolling Stone's 100 Greatest Albums of the 80's-topped the R&B chart for four weeks. In 1983, Clinton also released an album credited to "the P-Funk All-Stars," which drew on the talents of various members of Parliament and Funkadelic (including Bootsy Collins), plus guests like Sly Stone and Bobby Womack.A new generation of hip young listeners discovered P-Funk via rap and hip-hop records that heavily sampled Clinton's vast body of work. By the Nineties, Clinton was widely recognized as a black-music patriarch and pioneer whose contributions put him in a league with James Brown. In fact, Clinton is second only to Brown as the most heavily sampled artist. Meanwhile, the Parliament-Funkadelic juggernaut has shown no signs of slowing down, remaining active on the recording and touring fronts as George Clinton and the P-Funk All-Stars. One of their later albums-The Awesome Power of a Fully Operational Mothership (T.A.P.O.A.F.O.M.), released in 1996-returned the funk collective to the concept that helped establish them as visionaries 20 years earlier.[Photo by Bruce W. Talamon (c) 1977 All Rights Reserved]

WATCH: The Doors Share Surreal New Video for RIDERS ON THE STORM
THIS IS THE ARTICLE BOX TEMPLATE