QUEENS ON QUEENS: Madonna and Beyoncé Unite on BREAK MY SOUL (THE QUEENS REMIX) 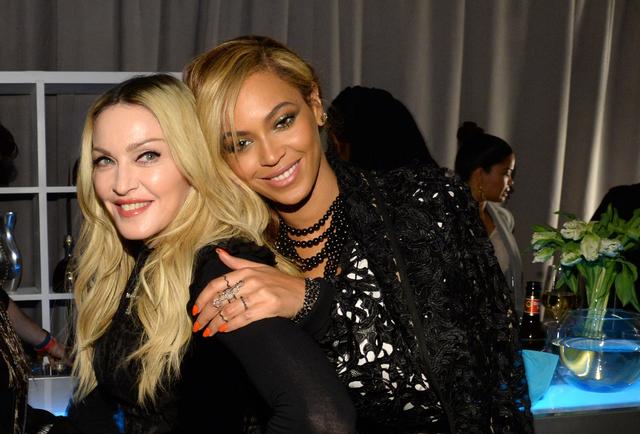 They had style, they had grace, and you won't break my soul: pop legends Madonna and Beyoncé have come together to create the collaborative remix, "Break My Soul (The Queens Remix)." The version mashes up Madonna's 1990 classic, "Vogue," with Beyoncé's current Hot 100 chart-topper, "Break My Soul." Riffing on the roll-call of icons that peppered "Vogue," the track finds Beyoncé shouting out a list of ground-breaking women in music over the years. Among those celebrated: Missy Elliott, Aretha Franklin, Lizzo, Jill Scott, Anita Baker, Nina Simone, Rosetta Tharpe and Betty Davis. Music and movie legend Grace Jones even merits a pair of shout-outs:

Response to the surprise collab were fast and furious, with the called-out artists responding to being name-checked by Beyoncé. "I ALWAYS BELIEVED IN ME NOW BEYONCÉ BELIEVE IN ME TOO," shouted Lizzo on social media. “I remember when I was telling my friend’s mom what my major in college was going to be, and I told her I was going to major in music performance and she laughed in my face,” Lizzo added in a video. “She said, ‘Music performance? Like Beyoncé?’ and laughed in my face. Only have one thing to say: BYE.”

'For the newbies. Lady B, has *Always been Supportive," touted Anita Baker. "Her Cover of *Sweet Love, a few yrs ago?... Energized, My Catalog. And, always makes My Heart Smile."

Madonna herself jumped on Instagram to share a kind message she received from Beyoncé: “Thank You, Queen,” the letter begins. “I’m So Thankful For You You Have Opened So Many Doors For So Many Women," adding, “You Are A Masterpiece Genius. Thank You For Allowing Me To Sing In Your Song And Thank You For Naming The Remix!!!!”

The timing of the Madonna/Beyonce remix is strong, as Madonna's highly anticipated FINALLY ENOUGH LOVE: 50 NUMBER ONES hits collection arrives next Friday, August 19.

Listen to the remix via the official visualizer below.

WATCH: Madonna Shares Music Video for HUNG UP ON TOKISCHA
THIS IS THE ARTICLE BOX TEMPLATE