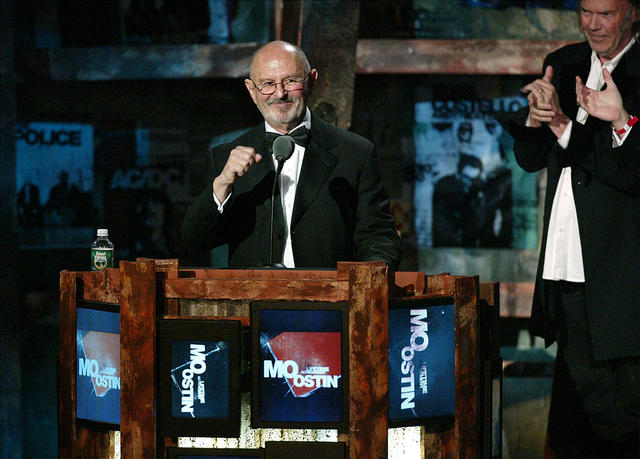 Legendary Warner Records executive Mo Ostin passed away peacefully in his sleep last night at the age of 95. Mo was a towering figure in the history of our company and one of the prime architects of the modern music business. For Mo, it was always first and foremost about helping artists follow their muse. One of the pivotal figures in the evolution of Warner Music Group, in the 1960s Mo ushered Warner/Reprise Records into a golden era of revolutionary, culture-shifting artistry. Over his next three decades at the label, he remained a tireless champion of creative freedom, both for the talent he nurtured and the people who worked for him. He lived an extraordinary life doing what he loved, and he will be deeply missed throughout the industry he helped create, and by the countless artists and colleagues whom he inspired to be their best selves.

Born in New York, Mo’s family moved to Los Angeles, where he attended Fairfax High School and UCLA. He began his music career at Verve Records before Frank Sinatra hired him in 1960 to run a new label he had formed, Reprise Records. Sinatra’s philosophy became the philosophy that Mo carried with him throughout his career: “to create a company in which the artist was the highest priority.” In 1963, Reprise was acquired by Warner Bros. Records, bringing Mo into the pop culture mainstream just as a musical sea change was unfolding. With the British invasion in full swing, one of the first acts Mo signed was the Kinks, and before the decade was out, he had brought iconic artists such as Jimi Hendrix, Joni Mitchell, and Neil Young into the Reprise fold.

In 1970, Mo became President of Warner Bros. Records, and he began to oversee both the Reprise and Warner labels, building a groundbreaking company driven by risk-taking, a free-wheeling culture, a keen sense of humor, and an unrelenting support of original artistry. As Mo said, “We developed an artist roster that changed the music, and the music business.” Long-time Warner/Reprise artist Randy Newman echoed the feeling: “They trusted us enough to allow us the freedom to make the records we wanted to make.” And legendary producer Quincy Jones noted that “What makes Mo Ostin a great music executive is his ability to always remember rule number one: Let the artist be an artist.” In 1972, Mo was upped to Chairman, with longtime colleague Joe Smith becoming President of Warner Bros, Records.

Famed Atlantic Records producer and executive Jerry Wexler once noted that Mo “confected what was possibly the most tasteful and commercial record label of its day,” with “an overriding intelligence, an unflappable cool and patience forever.” Under Mo, Warner was not only a bastion of artistic freedom, but he also inspired a generation of label staffers to devote their lives to the music business. As Lenny Waronker – Mo’s executive partner, lifelong friend, and producer/A&R guru – once said, “When you work for Mo, you actually work with Mo. It truly is a partnership. His patience is remarkable and affects all of us who work with him, because he allows us the freedom to make mistakes and be creative.”

Mo was not only behind the creation of one of the world’s great labels, he was also a major force in the development of Warner Music Group. In 1970, with both Warner Bros. Records and Atlantic Records already part of the Warner Bros.-Seven Arts company, Jac Holzman’s Elektra Records joined the Warner family. And shortly thereafter, Mo – along with Jac and Atlantic’s Ahmet and Nesuhi Ertegun – spearheaded the formation of a game-changing global distribution company, WEA, giving the labels the power and freedom that came with controlling their own destiny.

Mo was inducted into the Rock & Roll Hall of Fame in 2003, when he fittingly received the Ahmet Ertegun Award, named after his WMG colleague. In the program for the ceremonies, Stan Cornyn – who had been Warner’s pioneering creative services head – wrote: “Mo sought the dedicated nonusual artist, and he stuck with the ones he signed,” going on to note that “Mo was brilliant, so brilliant he never told any of us how to do our job.” In 2017, Mo received the Trustees Award from the Recording Academy, presented “to individuals who, during their careers in music, have made significant contributions, other than performance, to the field of recording.”

Among his many philanthropic activities was major support for his alma mater, UCLA, where his contributions included The Evelyn and Mo Ostin Music Center, which provides students with state-of-the-art access to the latest advances in music technology; the Mo Ostin Basketball Center, the cutting-edge home for the men’s and women’s basketball programs; and the Mo Ostin Academic Center for Student-Athletes, which will further his visionary legacy.

Mo famously once said, “We’re not a record company, we’re a music company.” That same spirit lives on at Warner Music Group today. The “music first” philosophy he nurtured, and the business principles he pioneered, are part of our DNA. We are forever in his debt, and he will be deeply missed. Our condolences go out to his family at this difficult time.