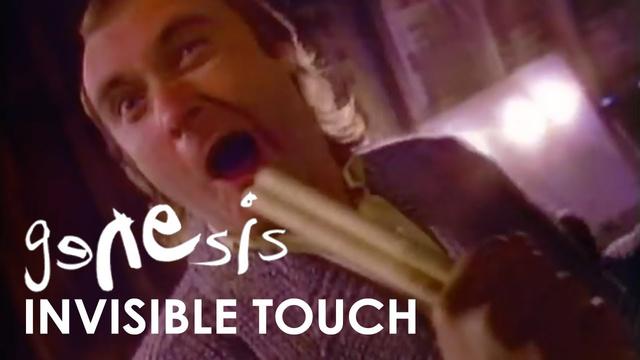 After the massive global success of the band's self-titled album in 1983, Genesis took a break--from itself. While the group was officially on a break, each member worked on solo projects: Mike Rutherford formed Mike + the Mechanics, Tony Banks made the Soundtracks album, and Phil Collins released solo album No Jacket Required, another immensely popular album around the world.

When Genesis did reconvene to record the band's 13th studio album, Genesis fever was at an all-time high. The band released "Invisible Touch," the lead single and title track, on May 19, 1986. A hit on radio, the track stormed the charts to peak at #1 on the Hot 100 for the week of July 19, 1986. For an outfit with 22 charting songs and seven top 10 hits, "Invisible Touch" still stands as the one and only US #1 single to Genesis' credit.

"'Invisible Touch' is my favorite Genesis song and it came more or less out of nowhere," Phil Collins revealed to Guardian in 2014. "We would arrive in the studio every day and just start playing. One day Mike Rutherford played a riff on the guitar, with an echo, and I suddenly sang: 'She seems to have an invisible touch - yeah!' It came in to my head fully formed. I wrote the lyrics about a person -- and I've known a few -- who gets under your skin. You know they're going to mess you up, but you can't resist. We didn't know the song would be a hit. It was just a case of thinking: 'Well, I like this, lots of other people might.' I can hear something of Prince and Sheila E in the drum machine - I was a fan of both."

The song's irreverent music video poked fun at the whole process, making it a surprise hit at MTV. For guitarist Mike Rutherford, it was just another day at the office. "We never took our music videos too seriously," he shrugged. "I think the public saw us as a bit serious, so we liked to surprise them. Phil would come up with some kind of comic character."

"Invisible Touch" also signifies Genesis at the peak of its commercial powers, a moment that wasn't lost on Rutherford: "We toured the Invisible Touch album in 1986 and 1987, playing four nights at Wembley stadium. It was a beautiful hot summer. As we went out on stage, I remember thinking: 'This is as good as it gets.' And I was right. The next album, We Can't Dance, did pretty well, but Invisible Touch was the pinnacle."