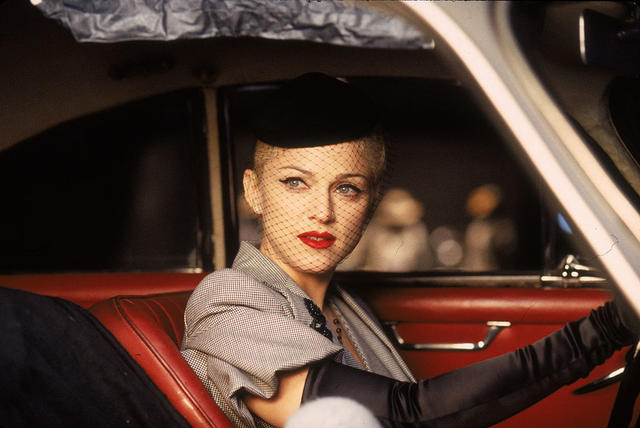 In 1994, Madonna was ready for a brand new--and much more mature--era. The years 1992 and '93 had been steeped in the steamy world of the EROTICA album, and the red-hot accompanying SEX book. After all of that bump and grind, Madge was more than ready for an entirely new direction.

What Madonna came up with was BEDTIME STORIES, a heavily R&B outing created with the help of all-star producers Babyface, Dave Hall, Nelle Hooper and Dallas Austin. Among the songs crafted with Babyface: the album's second single, "Take a Bow."

"No, I was actually thinking of a movie star when I was writing it," the artist told MTV's Kurt Loder on the set of the song's iconic music video in Ronda, Spain about her motivation. The quote led many to believe she was referring to her past relationship with actor Warren Beatty.

"Madonna was a fan of a song I did, ‘When Can I See You.’ Because of that, she was interested in working with me," Babyface revealed to Billboard in 2014. "She came to me for lush ballads, so that’s where we went. I wasn’t so much thinking about the charts. I think I was more in awe of the fact that I was working with Madonna. It was initially surreal, but then you get to know the person a little bit, and you calm down and then it’s just work. And work is fun. ['Take a Bow'] was just a beat and the chords. From there we collaborated and built it up." At Madonna's insistence, the pair utilized a full orchestra on the track; For Babyface, a first.

"Take a Bow" was released as on December 6, 1994. The song was an immediate hit, thanks in part to the popularity of the aforementioned music video, a cinematic big-budget affair featuring Madonna as the beleaguered lover of actor and real-life bullfighter, Emilio Muñoz. It peaked at #1 on the Hot 100 for the week of February 26, 1995. The track maintained the top spot for seven weeks in a row. "Take a Bow" also hit #1 on the Adult Contemporary chart, for the week of February 19, 1995; the tune held firm at the top of the chart for more than two months with a nine-week run. It still stands as her longest-running #1 on the Hot 100.

QUEENS ON QUEENS: Madonna and Beyoncé Unite on BREAK MY SOUL (THE QUEENS REMIX)
THIS IS THE ARTICLE BOX TEMPLATE