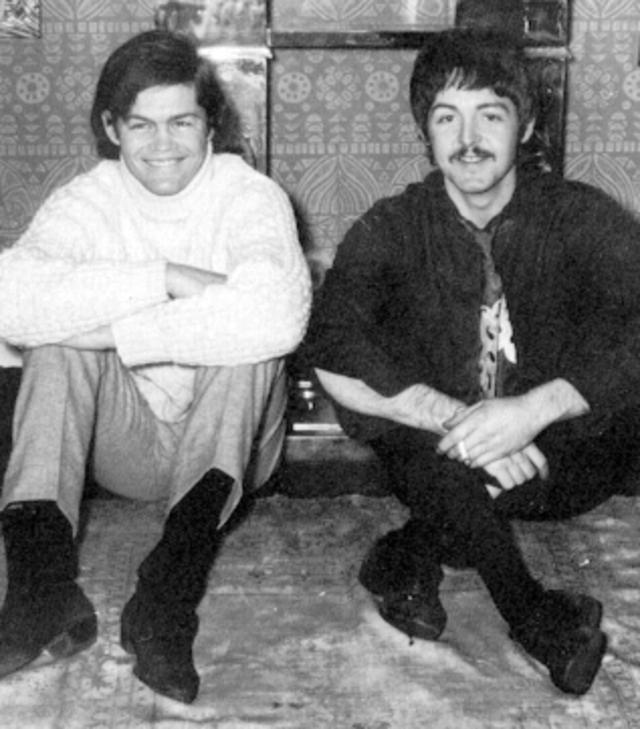 50 years ago today (or possibly yesterday, given the time zone difference between the US and the UK), a Monkee met a Beatle and – during the course of the trip – experienced an evening which led to the germination of a controversial Monkees song.

If you’re slightly startled at the news that there actually was a controversial Monkees song, then you must not be from the UK, as that’s where the song was deemed to be controversial. Rather than head straight down the path to that story, however, we’re going to take a slightly winding road to get there.

On February 6, 1967, Micky Dolenz flew to London, had a busy day of interviews, and then spent his evening hanging out with Paul McCartney. The two met up at a London disco, at which point Paul invited him back to house in St. John’s Wood, an offer Micky happily accepted. According to Andrew Sandoval’s invaluable tome The Monkees: The Day-by-Day Story of the ‘60s Pop Sensation, Paul played Micky the as-yet-unreleased “Penny Lane” and “Strawberry Fields Forever,” with Micky later acknowledging that he preferred the latter track because “it’s more progressive” and “it’s the kind of music I want to do.”

Per Sandoval, “Towards the early hours of the morning, McCartney entertains Micky by playing a special left-handed sitar. At 2:00 am, Brian Epstein invites Micky, McCartney and their entourage to his flat to watch films of The Spencer Davis Group and Cream. Two and a half hours later, McCartney drives Micky back to his hotel in the Beatle’s Aston Martin.” Somewhere in the midst of the trip, photos are taken of Micky and Paul hanging out, including one featuring Paul’s sheepdog, Martha, later to turn up as the titular character in a song on THE BEATLES, a.k.a. “The White Album.”

It’s also worth noting that Michael Nesmith joined Micky in London a few days later, at which point Mike had his own encounter with Paul and, if rumor can be believed, also attended a Kinks recording session. It’s never been officially confirmed, however, which is why this isn’t called “Monkee Meets Kink.” (Okay, that’s probably not the only reason this isn’t called that, but it’s definitely one of them.)

Okay, now you’re probably starting to wonder when we’re going to get around to explaining how this controversial song comes into play, so here’s the story. While in London, the Beatles threw a party for the Monkees, one which was attended not only by the Fab Four but also by Cass Elliott and Samantha Juste, a.k.a. the future Mrs. Dolenz, although she’s also recognized as “the being known as Wonder Girl.” Yes, you’re figuring it out now: “Randy Scouse Git” was inspired by the party, so you can now identify “the girl in yellow dress” (Elliott) and “the four kings of EMI” (the Beatles) referenced in the lyrics. But why was it controversial?

Okay, so maybe it was a short-lived controversy that was basically averted before it was ever really an issue, but it was a controversy nonetheless.

HERE WE COME: When the Monkees Ruled America
THIS IS THE ARTICLE BOX TEMPLATE