Single Stories: The Rembrandts, I'LL BE THERE FOR YOU - THEME FROM 'FRIENDS' 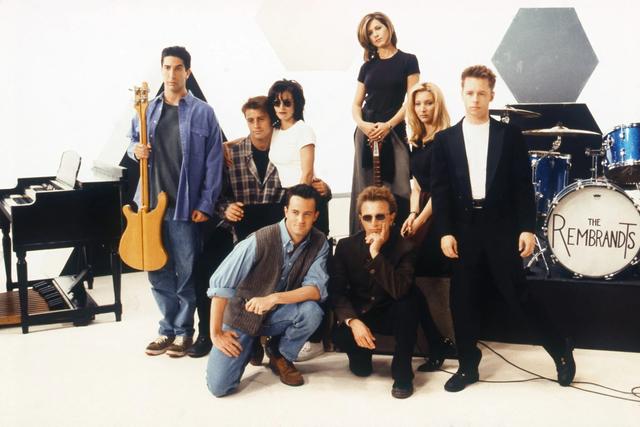 September 22, 1994, is a monumental date in TV sitcom history: that's when NBC introduced the world to Ross, Rachel, Phoebe, Monica, Chandler and Joey with the debut of Friends. The show arrived with a very catchy theme song that got so big it was transformed into a top 20 hit.

The infectious tune was written by legendary writer Allee Willis and Michael Skloff: "I had seen the pilot, and that one line ('I'll Be There For You') had been given to me by Michael Skloff, who had started on the music, and it was just supposed to be about the loyalty of friends," the late Willis (she died in 2019) explained to Independent UK. "That no matter how screwed up your life was, I'll be there for you."

“We liked [the song] immediately, and it had some good people working on it," recalled Rembrandts singer Danny Wilde said. "So we thought ‘Why not? Nobody will even know it was us, anyway’. During the first season [of Friends], we weren’t even listed on the credits.”

Given the immediate and stratospheric success of the TV show, it wasn't long before there was a serious demand for "I'll Be There for You" as a single.

"It was never, ever to this day released as a single," Willis dished. "It was just DJs who made a cassette of the song and just started playing it. And it became the #1 airplay record of the year, but the Rembrandts never wanted it out as a single because they didn't write the song. At that point, the only way they could get the Rembrandts to do the record was if they got songwriting credit. So the song needed a bridge, and it needed a second verse lyric, and they wrote that. They don't have credit on the theme, but they have it on the record."

The newly expanded version of "I'll Be There for You" was sent to US radio stations on May 23, 1995, landing as the last song on the Rembrandts' third album, L.P. As the song exploded at radio and started to climb the charts, the unexpected success actually proved to be detrimental to the band.

“Before Friends we’d been playing all these underground venues," Wilde said. "But ‘I’ll Be There’ was so huge that we ended up playing stadiums almost overnight… I think we lost a lot of our original fans at that point, and many people stopped taking us seriously...You could say [‘I’ll Be There for You’] became something of a curse, yes,” he admitted. “We were tired of it being the only thing we were known for, and we were tired of being on the road.”

The popularity of "I'll Be There for You" sent it sailing up the charts, eventually peaking at #17 on the Hot 100. The song hit #1 on the Billboard Radio Airplay chart for eight weeks. Over in Canada, the tune was #1 for five straight weeks, and landed as the country's #1 song for the year 1995.

“I remember thinking it was awesome, a really cool little pop tune. It had great harmonies and this upbeat vibe," Wilde recalled. "It was only when it all blew up and we became known for this Monkees-style jingle, that the shine kind of wore off...You could say [‘I’ll Be There for You’] became something of a curse, yes. We were tired of it being the only thing we were known for, and we were tired of being on the road. There was no outright animosity between us, but we needed a break from each other.”

Wilde does concede that the song's success paid off quite nicely, allowing him to put both of his kids through college: “With the repeats, that show is sure to outlive me. But I guess that’s kind of cool, isn’t it? That way, The Rembrandts will never be forgotten.”

More on The Rembrandts

Happy 25th: The Rembrandts, UNTITLED
THIS IS THE ARTICLE BOX TEMPLATE