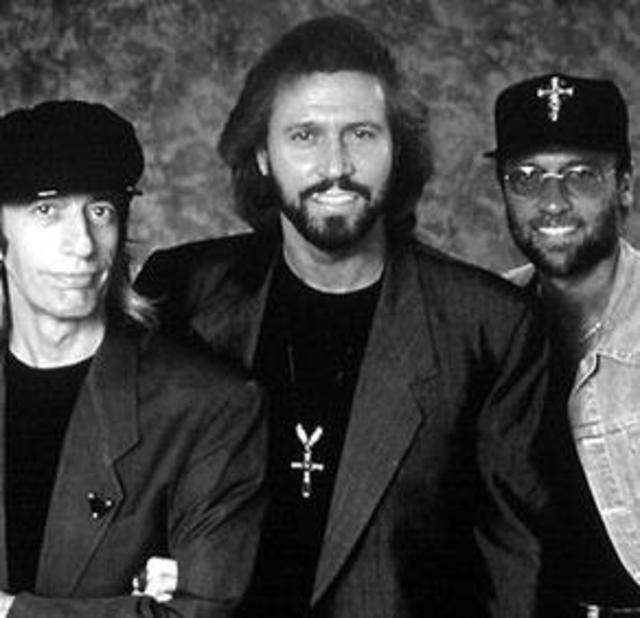 Inductees: Barry Gibb (vocals, guitar; born September 1, 1946), Maurice Gibb (vocals, bass, keyboards, guitar, percussion; December 22, 1949 - January 12, 2003), Robin Gibb (vocals; December 22, 1949 - May 20, 2012)Barry, Maurice and Robin Gibb – better known as the Bee Gees – are among the most successful vocal groups in rock and roll history, having sold more than 200 million albums to date. The trio's contributions to 1977's Saturday Night Fever pushed that soundtrack album past the 40 million mark. It reigned as the top-selling album in history until Michael Jackson's Thriller – an album that Jackson has acknowledged was inspired by Saturday Night Fever – surpassed it in the Eighties. Saturday Night Fever and 1979's Spirits Having Flowncombined to yield six Number One hits, making the Bee Gees the only group in pop history to write, produce and record that many consecutive chart-topping singles.Britain's first family of harmony, the Bee Gees might be pop's ultimate chameleons. They took wing as a Beatles-inspired, vocal-oriented pop band, cutting the exemplary Bee Gees 1st, Horizontal and Idea in a two-year span during the late Sixties. Thereafter they made side forays into conceptual works (the double-LP Odessa) and even took a country-flavored turn (1973's Life in a Tin Can). The mid-Seventies found them working in a more R&B-influenced groove-a fortuitous move that paid dividends within the growing dance culture taking shape at urban discotheques. With Main Course and Children of the World, the Bee Gees blossomed as architects of high-quality, song-oriented disco. Their career as pioneers of dance-oriented pop was forever sealed with the remarkable success of Saturday Night Fever and Spirits Having Flown. When their prolonged era of superstardom inevitably cooled, the Bee Gees re-emerged in the late-Eighties as a mature band of survivors.Regardless of trends, the Bee Gees have demonstrated a unique ability to adapt to the changeable pop scene in an instinctive and organic way. While the various styles they've have undertaken may superficially seem unrelated, the introspective British pop and danceable American R&B that served as dual influences have remained consistent throughout a professional career that's approaching its fortieth year.Barry Gibb and twin brothers Maurice and Robin were born in Douglas, Isle of Man (an island off the British coast). Their father, Hughie Gibb, was a big-band leader and drummer. In 1958, the family moved to Australia, where they lived for eight years. Calling themselves the B.G.'s-short for "Brothers Gibb" and later amended to Bee Gees-the brothers began performing Down Under. Their first Australian hit came in 1966 ("Spicks and Specks"), and its success subsidized the family's return to England in 1967. Over the next two years, the group launched a string of hit singles executed in a brooding, distinctively British pop style. From this period came such well-crafted, harmony-rich songs as "New York Mining Disaster 1941," "To Love Somebody," "Massachusetts," "Words," "I've Got to Get a Message to You" and "I Started a Joke."Following a temporary breakup, the Bee Gees promisingly kicked off the Seventies with another round of pop hits: "Lonely Days" (Number Three, 1970) and "How Can You Mend a Broken Heart (Number One, 1971). But the group thereupon foundered commercially and creatively until 1975's Main Course, which found them taking a breezy, rhythm & blues oriented approach. Recording for the second time with producer Arif Mardin (who'd previously produced 1974's Mr. Natural), the trio exploited their upper registers on such danceable mid-decade smashes as "Jive Talkin' (Number One, 1975) and "Nights On Broadway (Number Seven, 1975), which established them as key architects of the emerging disco movement.On the heels of this breakthrough, the Bee Gees were distressed to learn they could no longer work with Mardin since manager Robert Stigwood had shifted distribution of his RSO label from Atlantic (where Mardin was house producer) to Polydor. Nonetheless, the brothers proved resilient, teaming with engineer-producers Albhy Galuten and Karl Richardson-who worked at Miami's Criteria Studios, where Main Course had been recorded-for Children of the World. As it turned out, Main Course was just an appetizer compared to the awesome run of Number One hits that followed from 1976 to 1979: "You Should Be Dancing," "How Deep Is Your Love," "Stayin' Alive," "Night Fever," "Too Much Heaven," "Tragedy" and "Love You Inside Out."During the late Seventies, the Bee Gees' dominated dance floors and airwaves. With their matching white suits, soaring high harmonies and polished, radio-friendly records, they remain one of the essential touchstones to that ultra-commercial era. Their pinnacle came with the 1979 release of Spirits Having Flown, which launched three Number One singles and sold 20 million copies worldwide. In the midst of all this came a low point, too: their starring roles (with Peter Frampton) in a 1978 musical film inspired by the Beatles' album Sgt. Pepper's Lonely Hearts Club Band, an embarrassment that bordered on debacle.The Bee Gees' success hasn't been limited to recordings issued under their own name. Individually and together they've written and produced major hits for such artists as Barbra Streisand ("Woman in Love," Guilty," "What Kind of Fool"), Diana Ross ("Chain Reaction"), Dionne Warwick ("Heartbreaker"), Dolly Parton and Kenny Rogers ("Islands in the Stream"), Frankie Valli ("Grease"), Yvonne Elliman ("If I Can't Have You") and their younger brother, the late Andy Gibb ("I Just Want to Be Your Everything," "[Love Is] Thicker Than Water," "Shadow Dancing"). In 1977, they became the first and only songwriters to place five songs in the Top Ten at the same time.While their phenomenal hit streak of the late Seventies inevitably ended, the Bee Gees have remained intermittently active on the recording and performing fronts. In 1989, the title track from the album One returned them to the Top Ten. A comprehensive box set-Tales from the Brothers Gibb: A History in Song, 1967-1990-was released in 1990.On May 20, 2012, Robin Gibb of the Bee Gees died of complications from intestinal surgery and cancer in London. He was 62 years old.