THE ONE AFTER THE BIG ONE: Ramones, ROAD TO RUIN 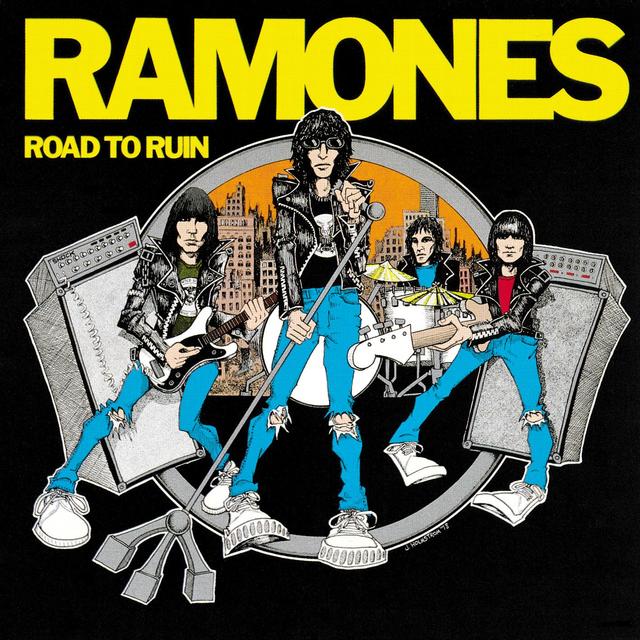 The Ramones’ first three studio albums were preternatural explosions of grit, urban restlessness and speed – everything one could ask for out of punk rock in 1976 and 1977, for those who knew to ask. As the genre quickly developed, listeners learned to ask for other things – political fixations (the Clash), exhaustive power (the Damned), snotty nihilism (the Sex Pistols) and, you know, women (Patti Smith, X-Ray Spex).

The Ramones had something else in mind as they set about recording their fourth album in 1978 – AM radio pop. That’s right. See, their third album, 1977’s ROCKET TO RUSSIA had actually cracked the Top 50 on the Billboard album chart, and the band thought that exploring melody and expanding past their 120-seconds-per-song threshold might actually yield them a hit or two. It helped that singer Joey Ramone was an unabashed aficionado of the Beatles and the Phil Spector “Wall of Sound” productions for Darlene Love, the Ronettes and others. The records these and other pop hitmakers put together could tug at the heartstrings effortlessly; if that magic could be married to the Ramones’ volume and distortion, the world could conceivably be conquered.

Global domination was unfortunately not in the cards, but the resulting record, ROAD TO RUIN, is a classic that has grown in stature and listener lore over the years.

To hear the difference in approach most clearly, cue up “Don’t Come Close,” with its jangly guitars and subtle(!) rhythm section nudging the song forward. There’s also the band’s cover of the Searcher’s “Needles and Pins,” on which you realize Joey’s really been singing this song forever – this is just the first time he’s done so on tape. His vocal contains more pathos than he’d ever committed to record to that point, at least until you flip over the album and hear him sing “Questioningly,” another Byrds-y cut that’s as close to a ballad as the Ramones would or could come.

Of course, these are the Ramones, and these relatively flowery paeans to love lost and found reside next to cuts like “I Don’t Want You” and “I’m Against It,” with Johnny Ramone’s guitars turned up to jet-engine volume. ROAD TO RUIN also contains “I Wanna Be Sedated,” which is quintessential Ramones, one of the three or four songs for which they are best known. Then there’s also “Bad Brain,” which is spiked with random sounds (very Pink Floydish. No, not really – just kidding) and also contains chord progressions bands like the Pixies and Nirvana were about ten or so years away from absorbing into their own creations.

They did not capture the imagination of millions with ROAD TO RUIN, but the Ramones did expand and deepen their sound, giving those who did hear it no small amount of pleasure. Add yourself to that number by putting it on and pogoing around the room, or just sitting back and enjoying.