The One After the Big One: The Doors, L.A. WOMAN 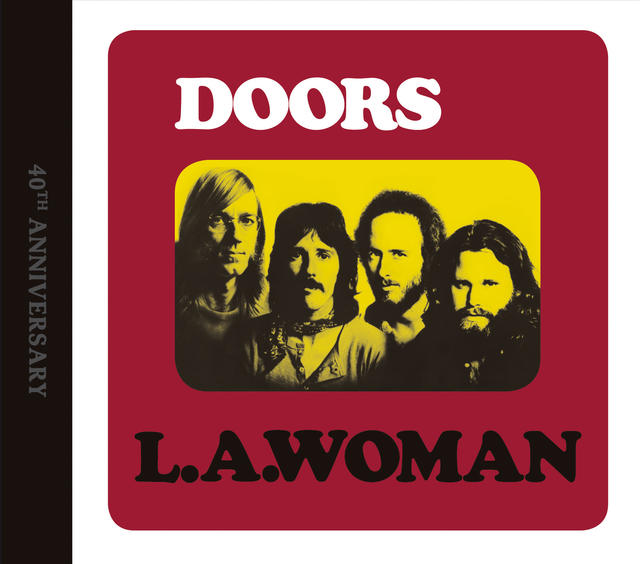 After the Top Five success of 1970’s MORRISON HOTEL, the Doors were in a bit of a pickle. Their record label, Elektra, flooded the market with a live album (ABSOLUTELY LIVE) and a best-of package (13) to close out 1970, and clashed with the band repeatedly; producer Paul Rothchild oversaw early sessions for the band’s studio follow-up to MORRISON HOTEL, only to quit over disagreements about musical direction; most importantly, singer Jim Morrison was facing jail time over a public lewdness conviction, stemming from the band’s infamous Miami gig, during which the Lizard King allegedly exposed himself to the audience.

The Doors were indeed a ragged bunch when they gathered in Los Angeles to record L.A. WOMAN, Morrison’s final studio album with the group, but their condition seemed to feed their collective muse, at least where this authoritatively bluesy and deeply inward-looking collection was concerned. Nowhere is that more evident than on the nearly eight-minute long title track, on which the band takes the listener tooling around southern Cali, after they “took a look around, see which way the wind blows.” For them Los Angeles is a woman, a feisty and mysterious one at that, and as Sunday afternoon turns to early evening, turns to a night lit only by her streetlights and all-night diners and bars, Morrison’s blues deepen, as does his connection to this city, HIS city. By the time he gets to the “Mr. Mojo risin’” segment (an anagram of his name, incidentally), things are winding down, only to start back up again soon thereafter.

The journey and the blues continue throughout the album, from the thump of “Been Down So Long” to the run through the blues standard “Crawlin’ King Snake” and the slinky, organ-fueled “Cars Hiss by My Window.” The weirdness Morrison witnesses (and in which he takes part) reaches its apogee on a “L’America,” where a galloping cadence underpins a sort of ramble in search of “the rain man” and a place to “trade some beads for a pint of gold.” The music is loose but intense, with a hint of danger flowing throughout.

Of course, the album contains “Riders on the Storm,” the epic of all epics (though shorter than “L.A. Woman,” it FEELS longer), which rolls slowly through the creepy netherworld of Morrison’s imagination, one fraught with sex and murder and the uncomfortable weight of mortality. “Into this world we’re thrown,” he sings, acknowledging the randomness and violence of a life created without one’s concurrence and lived in a state of confusion. Along with “The End” (from the band’s 1967 debut), “Riders on the Storm” is the Doors reaching down to their greatest depth, pulling up something strange and fascinating.

Strange and fascinating — those are two great words to describe the whole of L.A. WOMAN.