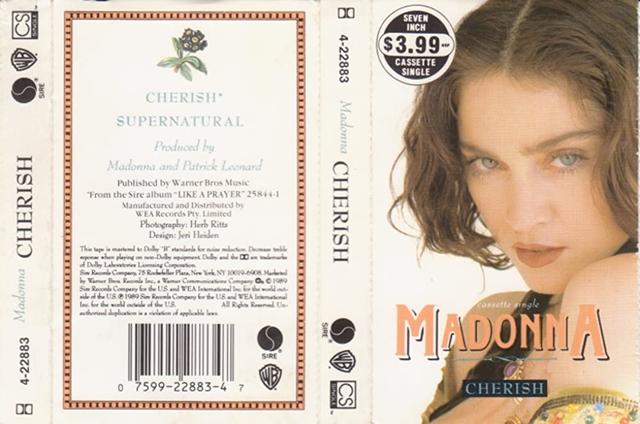 Madonna was already two singles deep into blockbuster fourth studio album, Like a Prayer, by August 1989; the title track and lead single had soared straight to #1 on the Hot 100. The follow-up track, "Express Yourself," made it all the way to #2 on the same chart, blocked from #1 by Simply Red's "If You Don't Know Me By Now."

The lighthearted and retro vibe of third "Cherish" struck a chord with pop music fans, making it a radio hit over the summer of '89. While the track cruised up the charts, there was one discriminating listener not so fond of the song: Madonna herself.

"I've never been a good judge of what things are going to be huge or not," the artist told Rolling Stone in 2009. "The songs that I think are the most r*t*rd*d songs I've written, like 'Cherish' and 'Sorry,' a pretty big hit off my last album, end up being the biggest hits. 'Into the Groove' is another song I feel r-t-rd-d singing, but everybody seems to like it."

"Cherish" arrived with a stylish black and white music video, directed by the late photography legend, Herb Ritts. The clip--captured along the Pacific Ocean shore at Paradise Cove Beach in Malibu, CA--was actually Ritts' very first music video, setting the stage for more iconic B&W visuals for the likes of Chris Isaak ("Wicked Game"). FUN FACT: Ritts tried to talk Madonna out of having him direct the video, claiming that he was "just" a still photographer. Madonna's perfect response: "Well you have a few weeks to learn."

"She kept asking me, and I said I really didn't know the first thing about moving imagery," Ritts explained to art curator François Quintin in a 1999 interview (via Rolling Stone). "Finally, I practiced with a little Super 8 camera when I was on a job in Hawaii, and came back and said I could do it. Two weeks later, I was filming 'Cherish.' I directed it and did the camera work as well. It was invigorating."