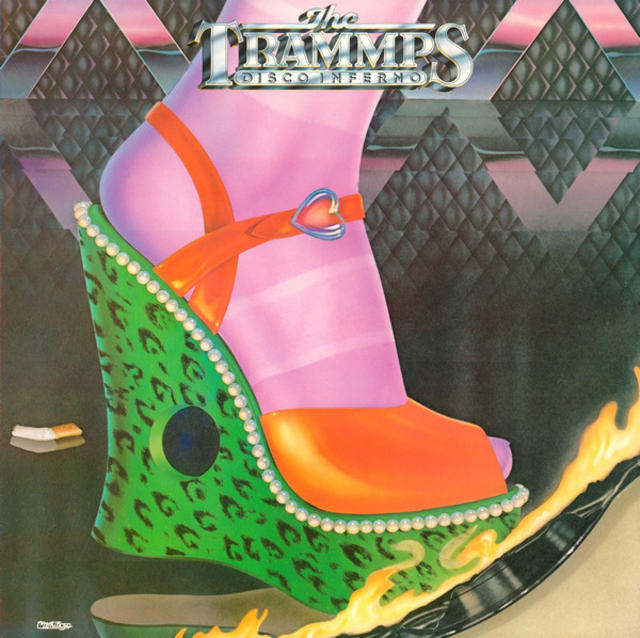 In 1976, disco was the hot new dance sound sweeping America. While the year was still ruled by traditional pop-rock, with the top two songs of the year being from Wings ("Silly Love Songs") and Elton John with Kiki Dee ("Don't Go Breaking My Heart"), right there at #3 was Johnny Taylor's massive "Disco Lady." With more disco classics like Silver Convention's "Fly, Robin, Fly," Walter Murphy's take on "A Fifth of Beethoven" and Andrea True Connection's "More, More, More" all found in the year-end Hot 100 top 20, the disco sound was a fresh and exciting new way to get people up and dancing--and getting hotter by the minute.

The year was almost over when Philadelphia band the Trammps released the Disco Inferno album on December 29, 1976. The group had already scored a #1 hit on the Hot Dance Club Play chart earlier in the year with "Disco Party." The Disco Inferno title track followed suit, soaring straight to #1 on the same chart.

For the mainstream, disco was still an underground phenomenon that had yet to cross over into middle America. That would all change with the release of movie Saturday Night Fever a year later in December 1977. With young star John Travolta as its leading man, the film's breakout success dropped disco front and center into the pop culture conversation, and middle America, from suburban moms to middle-school kids, couldn't get enough of it. The movie's soundtrack was a smash hit, and included among its tracks: the Trammp's "Disco Inferno."

More than a year after it was released and a success on the dance charts, "Disco Inferno" lit up pop radio and the charts, dancing all the way up to #11 on the Billboard Hot 100 over the week of May 28, 1978. The #1 single that week: Wings' "A Little Luck."

The Disco Inferno album is more than just its title track; the LP is loaded with hypnotic dance tracks including "Body Contact Contract" and "I Feel Like I've Been Livin' (On the Dark Side of the Moon)" that percolate with a variety of dance-floor flavors. It's clear, however, that "Disco Inferno" is the star of the show, from the dynamic arrangement, upbeat 129 BPM tempo and singer Jimmy Ellis' urgent vocal delivery.

"Maybe one day we'll get into more mellow things. But not right now because our audiences, the public, expects us to do what we're doing — plus we enjoy it!," singer Harold "Doc" Wade said in the summer of 1977. "It's been given that name (disco) but all the way along the line, we've basically been playing the same kind of music. It's just that with the trend towards things being disco this, disco that, we got labelled that way — our music fell right into the bag... Yes, we're a 'disco' oriented group in a sense that our music has direct appeal in the discos and of course, that's no accident!"