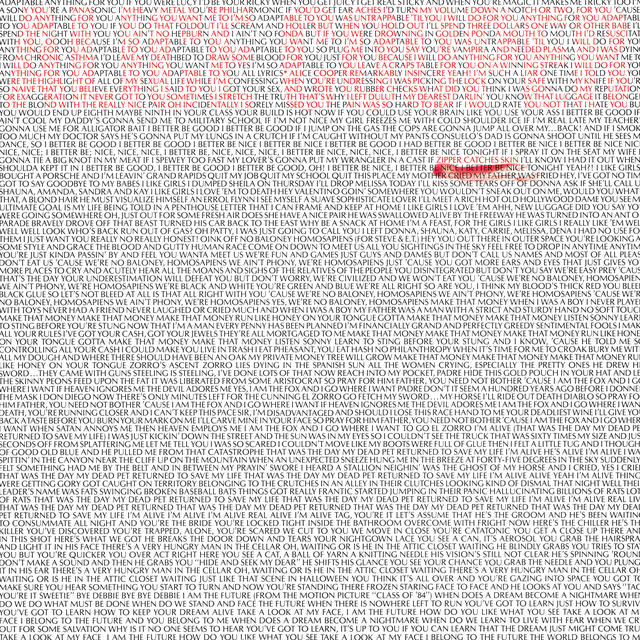 Today we celebrate the birthday of the man who may not have officially invented “shock rock” but certainly helped turn it into a tremendous mainstream success: Alice Cooper. In honor of the day Vincent Damon Furnier – yes, that’s Alice’s real name – was first welcomed into the world, we thought we’d take a look back at an album in his discography which wasn’t a tremendous hit upon its initial release, possibly because its title has a tendency to create a mental image which makes most people cringe and/or shudder.

Released in 1982, ZIPPER CATCHES SKIN – we’ll pause for the requisite reaction – was recorded at Hollywood’s Cherokee Studios, where Cooper co-produced all but one song on the album with his then-bassist, Erik Scott. There’s one exception amongst the LP’s ten tracks – “I Am the Future,” which was produced by Steve Tyrell – and while it may be completely coincidental, it must be said that it’s this track which served as the album’s first single. In addition, the track was also the theme song of the film Class of ’84, a cult classic which is probably best known these days for having featured a pre-Family Ties Michael J. Fox, who – just to give you an idea of how long ago it was – was still being credited sans “J.”

“ZIPPER CATCHES SKIN finds the rock legend having a go at a very New Wave-influenced brand of pop-rock while trying to remain ‘Alice,’” wrote Ultimate Classic Rock scribe Dave Swanson in his 30th-anniversary piece about the LP. “At times, the album comes off like an off-kilter hybrid of the Knack and the Cars.”

Fair warning: as great as that may sound, listeners are likely to find that the tunes may not be as memorable as those on Cooper’s previous albums, although that’s almost certainly not why he doesn’t have any particular recollections of the album. It’s all too well documented that Cooper was seriously in the sway of his addictions at the time, and even if it wasn’t, he’s freely admitted that there are three albums in his back catalog – SPECIAL FORCES, ZIPPER CATCHES SKIN, and DADA – of which he can only say, “I wrote them, recorded them, and toured them, and I don’t remember much of any of that.”

This is startling information, mostly because it’s hard to imagine anyone forgetting a song entitled “I’m Alive (That Was The Day My Dead Pet Returned To Save My Life),” but, hey, that’s rock ‘n’ roll!