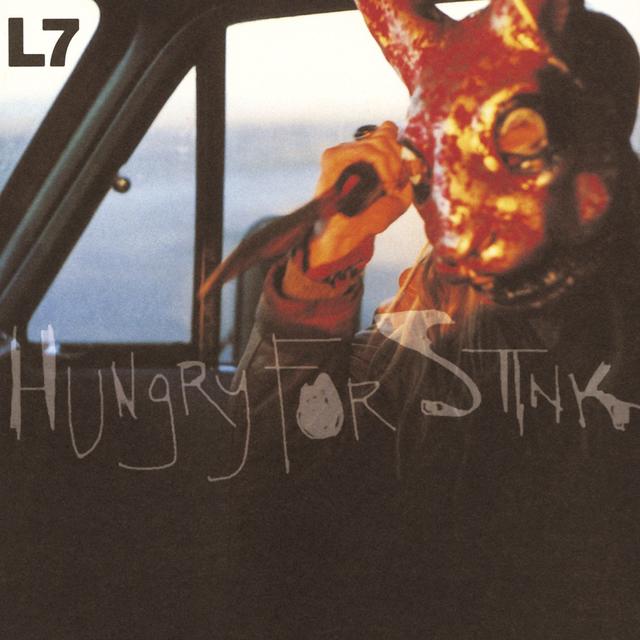 25 years ago this week, L7 released their fourth studio album, an LP which – while it may not be viewed as their most iconic – proved to be the most commercially-successful of their career.

Co-produced by the band with GGGarth (the producer/engineer otherwise known as Garth Robinson), HUNGRY FOR STINK arrived two years after their seminal album BRICKS ARE HEAVY, which served to established L7 as a viable contender in the race to see which bands could both be deemed “grunge” by the masses and find decent commercial success. That album’s single, “Pretend We’re Dead,” scored a lot of alt-rock airplay at the time of its release, which enabled the band to build on that momentum with their next album.

HUNGRY FOR STINK scored at least one minor hit with its first single, “Andres,” a track that made it to #34 on the UK Singles chart and climbed into the top 20 of Billboard’s Alternative chart. Unfortunately, that was the extent of the album’s hit singles, but – as noted – the LP itself proved to be the biggest hit of the band’s career, hitting #117 on the Billboard 200 and made it all the way to #26 on the UK Albums chart.

It would be another three years before L7 returned with a new album, and by the time THE BEAUTY PROCESS: TRIPLE PLATINUM emerged, bassist Jennifer Finch was no longer part of the band’s lineup. Alas, many of those who’d picked up the previous two albums by the band had moved on to other musical interest, and the LP only hit #172 in the US and didn’t chart at all in the UK, but with HUNGRY FOR STINK, the band hit an all-time high, and it’s an achievement which should never be forgotten.