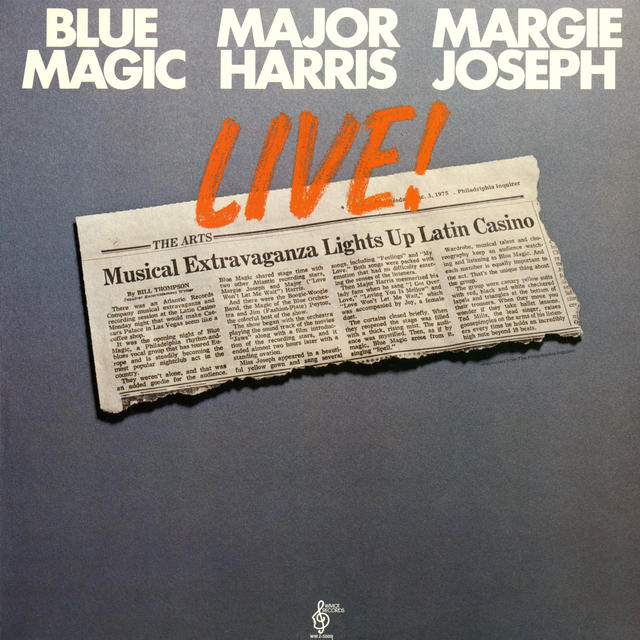 Bless whatever force – emotional, spiritual, artistic, commercial, etc. – that brought together Philly soul greats Blue Magic and former Delfonic Major Harris on a bill with the great Southern soul singer Margie Joseph at the Latin Casino in Cherry Hill, NJ in 1975. The walls in the room probably vibrated for hours after the gig was done and those who got to witness this summit doubtless left the venue dazed, tingling and probably in an amorous mood. It was that kind of performance.

Blue Magic emerged from Philadelphia in 1972 and immediately climbed the U.S. R&B charts with songs like “Sideshow,” “Chasing Rainbows” and “What’s Come Over Me,” each of which gets a workout on LIVE! Another highlight is the medley that bookends a short sprint through Barry White’s “You’re My First, My Last, My Everything” with their own hits “Spell” and “We’re on the Right Track.” “Haunted (By Your Love)” slows the tempo and emphasizes the song’s sense of longing, and it works so well, your own heart breaks a little.

Major Harris joined the Delfonics after their hit-making days were largely over, but he made an impact on the group, and when he went solo in 1974, had a hit straight away with “Love Won’t Let Me Wait,” the slow jam of all slow jams. “This next song goes out to all the ladies, all over the world,” he says on LIVE! to introduce the song, “and also to all the lovers in the house.” They doubtless paid close attention – the song gets some of the wildest applause of the evening. Harris also shines as the voice of the man leaving his lover in “I Got Over Love,” and he duets with Margie Joseph on “You’re a Special Part of Me,” a hit for Marvin Gaye and Diana Ross that sounds just as timeless here as it did in its original version.

At the time of this show, Joseph was earning comparisons to Aretha Franklin, and she comes through in this show like she’s working toward taking that crown. Just listen to her ride the proto-disco groove of “Ridin’ High,” how confident she sounds, how she understands the dynamics of the song and plays with them. She can also wind down with Paul McCartney’s “My Love,” cracking open the Beatle guy’s ballad and revealing the soul song it actually is.

LIVE! shows three unique voices in mid-Seventies R&B playing at a high level for an appreciative crowd. You can join that crowd by cueing up the album today.