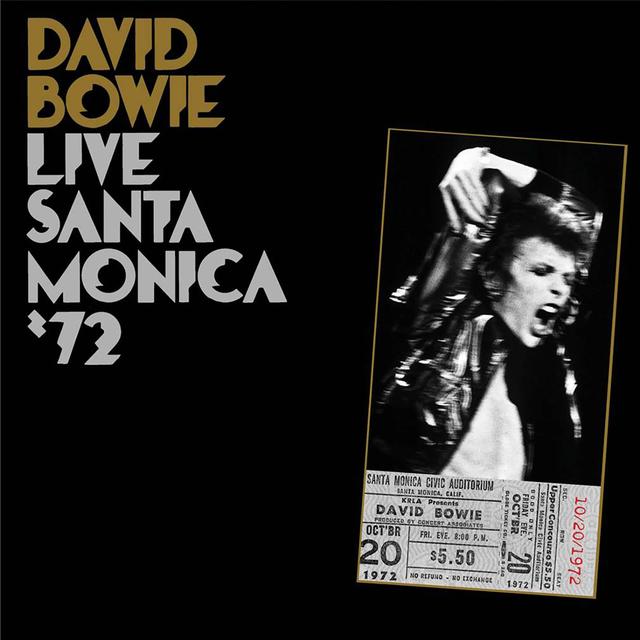 The problem with David Bowie’s live albums is that you can’t actually watch him perform what you’re hearing — a problem that haunts any live vinyl document he released (like 1974’s DAVID LIVE or 1978’s STAGE), but in particular the wonderful LIVE SANTA MONICA 1972. When he walked onstage at the Santa Monica Civic Auditorium on October 20, 1972, he was Ziggy Stardust, about 70 or so shows into a 190-date tour that cemented his icon status and left tens of thousands of attendees feeling like they’d seen a god.

And with good reason — he and the Spiders from Mars had a great night, giving definitive performances of several early Bowie numbers. Imagine being in the audience when the band hit the stage with a blast through “Hang on to Yourself,” with Bowie/Ziggy breathlessly getting the words out as he’s pushed by the raw power of Mick Ronson’s guitar and Woody Woodmansey’ s drumming. Or the hard glam workout of “Moonage Daydream,” which had to have hit those in the first few rows square in the chest, to life-changing effect. And the back-to-back salvos of “The Jean Genie” and “Suffragette City” must have rocked the rafters, much as they rattle the speakers of listeners at home.

The quiet portions of the evening resonate as well. Bowie covered Jacques Brel’s “My Death” several times in his career, and the rendition here is heavy without feeling weighed down by the dour subject matter. That he delivered it with just his voice and an acoustic guitar lends even more gravity, much the same way his “Space Oddity,” in any context, captured the loneliness of floating in space, but none more so than in the solo acoustic version here. And when the crowd recognized they were hearing “Life on Mars” (within the first few seconds, with just Bowie’s voice and a piano intro), you can feel their anticipation cascade into pleasure.

The October 20 Santa Monica show was broadcast over the airwaves of KMET-FM and for years before it saw official release, owning a bootleg copy of the show was a badge of honor among Bowiephiles. This official release is easier to find, sounds great and provides us with a wonderful record of Bowie at an early peak.