LIVE from Your Speakers: Thin Lizzy, LIVE AND DANGEROUS 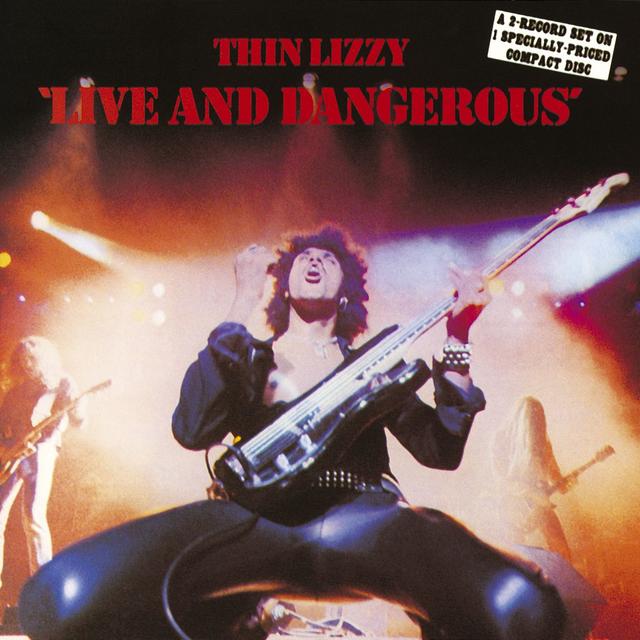 During the time he walked this planet, Thin Lizzy singer and bassist Phil Lynott was a hero, a demi-god, 6’ 1” of pure, swaggering Irish cool. He made anthems for the working man – indelible songs like “The Boys are Back in Town,” “Fighting My Way Back,” “We Will Be Strong,” “Jailbreak” and a rocking take on the traditional “Whiskey in the Jar” – and struck a chord with fans as seemingly disparate as Bono and James Hetfield. Yes, he had difficulties, both personal and musical, in his later years – namely, his substance abuse issues and lower-quality output in his solo work and with side projects. He lived only two years past Thin Lizzy’s split in 1984, succumbing to the physical ravages of his heroin addiction at 36 years old, but his reputation has only grown in the ensuing decades.

The major reason behind that is the power of the music he made with Thin Lizzy – records like JAILBREAK, CHINATOWN, BAD REPUTATION and BLACK ROSE are really good, albums most bands of the era would have been proud to call their own. Lizzy were a band that really came together onstage, though, and the sole live record they released while still together – 1978’s LIVE AND DANGEROUS – is proof positive of that fact.

From the sustained guitar chord and snare drum crack that kick off “Jailbreak,” the band is off and running. From the start, the familiar two-guitar attack is mixed right up front – Brian Robertson and Scott Gorham establish the melodies play off one another expertly, though you have to get to “Emerald” before you hear their signature twin leads. Lynott is in fine voice, of course, and his bass and Brian Downey’s drums are tighter than tight.

There are highlights aplenty across the double-album. “Cowboy’s Song” is one of those great Thin Lizzy anthems – the soft-to-loud dynamic slides naturally into a rollicking rocker, complete with the guitar harmonies Robertson and Gorham played so well. “The Boys are Back in Town” offers more of those elements, plus the singalong chorus everyone who’s ever listened to classic rock radio knows. “Massacre” and “Are You Ready” barely stay on the rails – a cool contrast to “Southbound” and “Dancing in the Moonlight,” where the structure of the songs are paramount to their performance.

There are little non-Lizzy bits that satisfy as well. “Dancing in the Moonlight” features a great saxophone solo from John Earle, and who’s that playing the harmonica on “Baby Drives Me Crazy,” but Huey Lewis (or “Bluesy Huey Lewis,” as he’s listed in the liner notes).

LIVE AND DANGEROUS is one of the great hard rock concert recordings of the ‘70s. May it be blasted out of speakers now and forevermore.