Make It a Double: Metallica, … AND JUSTICE FOR ALL 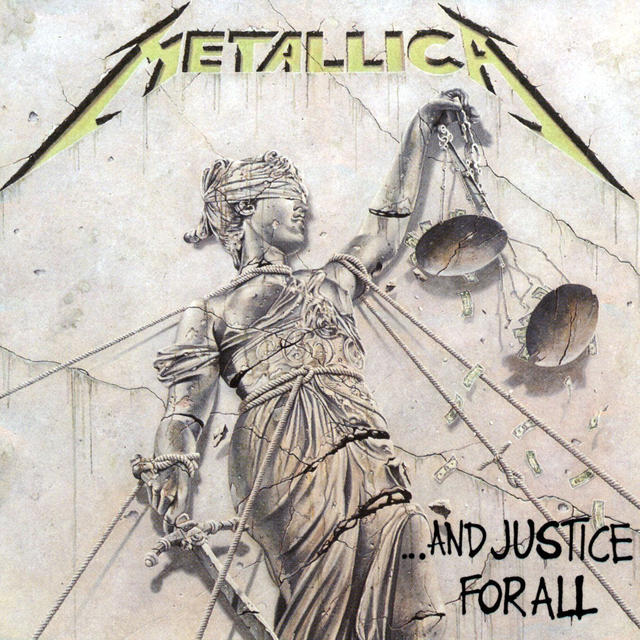 Not enough people anymore buy music in order to be pummeled. Some do, to be sure; Slayer, Mastodon and others like them remain quite popular among people who enjoy a good auditory beating. It's just not the same, though, as when Metallica was coming up through the ranks in the mid- and late '80s, when each new Metallica record provided metal fans not only with an opportunity to bang their heads, but also to put on their headphones, sit in a comfortable chair, and receive some honest-to-goodness stereophonic blunt-force trauma.

Many point to 1986's MASTER OF PUPPETS as the apotheosis of such experiential listening, and it is difficult to argue against it, if only for the opening hook-hook-uppercut of "Battery," the title track and "The Thing that Should Not Be." But for an unconventional production approach, however, those listeners might point to 1988's … AND JUSTICE FOR ALL instead. It's classic progressive thrash—long songs at breakneck paces, heavy, multi-layered guitar lines that came together for power chords and main riffs and double-octave motifs. And did we mention long songs? The shortest is 5:30, and two of them approach 10 minutes apiece.

In short, it's two LPs of glorious pummeling.

Take "Blackened," the album opener. It's everything one wants to hear from Metallica—the instrumental opening gives way to trip-hammer drumming and tandem guitar work, then James Hetfield rails about the destruction of the earth. The tempo shifts after second chorus and the song just churns with malevolent energy that explodes all around. Similarly, on "The Shortest Straw" a stop-and-start opening riff gives way to roiling rhythm guitars, then the tempo picks up. Hetfield rages about censorship and blacklisting ("Shortest straw / Challenge liberty / Downed by law / Live in infamy"), before giving way to a carefully constructed solo section.

On some songs, the band tries to lull the listener before delivering the first punch. These are the ones that start with quiet arpeggios played either on acoustic guitars or clean electrics—"One," "To Live is to Die," and the title track—only to detonate with power shortly thereafter. These are the musical equivalents of a boxer's feint with a left hand, only to deliver a clear shot with his right. Sneaky, those Metallica guys.

One cannot discuss … AND JUSTICE without mentioning the album's sound—everything is high-treble and compressed and Jason Newsted's bass is virtually inaudible. Some say it was the band hazing "the new guy" by pulling his parts back in the mix. This is unlikely—the band were cognizant of what made records sound good, and took great pains to construct them as such.

One might posit that the overall effect was to blunt the full force of the record out of concern for the safety of its listeners. Had Metallica employed the full sonic palate it used on 1990's METALLICA (a.k.a. The Black Album) on "Blackened" or "Eye of the Beholder," someone could have gotten hurt. As it stands, … AND JUSTICE FOR ALL delivers a pretty good thumping just the way it is.

...and Justice For All