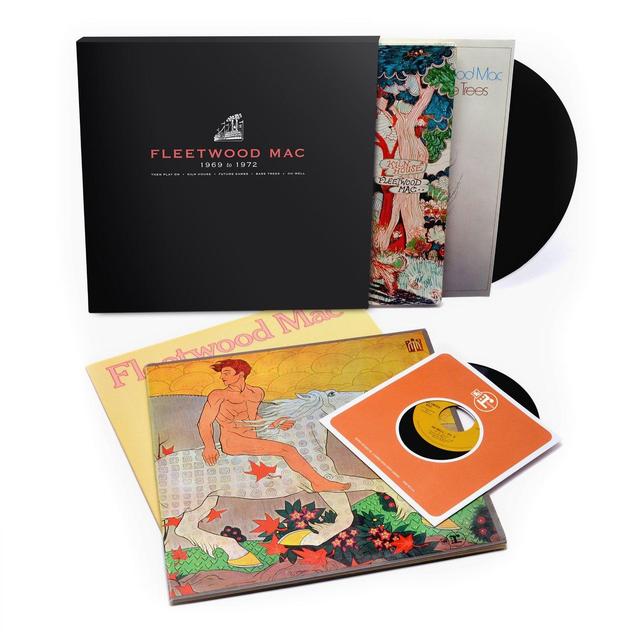 Both Will Be Available On August 20

The first is an expanded and remastered edition of THEN PLAY ON, Fleetwood Mac’s 1969 debut on Reprise. This reissue features the original U.K running order and track segues, with “One Sunny Day” and “Without You” making their first appearance on a CD issue of the album, as well as new liner notes by veteran rock journalist David Fricke and four bonus tracks, including the revered single “Oh Well – Pt. 1,” which boasts one of the great guitar riffs in rock history and has been covered by likes of Billy F Gibbons, Jimmy Page, and Tom Petty.

THEN PLAY ON: EXPANDED EDITION and FLEETWOOD MAC: 1969-1972 are both available now.

Fleetwood Mac was already a popular blues band in 1969 when they released THEN PLAY ON, the group’s stellar third studio album. It was the first with guitarist-songwriter Danny Kirwan and ultimately its last with founding member Peter Green. The album’s powerful mix of blues and rock includes standout tracks like “Rattlesnake Shake,” “Searching For Madge” and “Coming Your Way.” Rhino’s newly re-mastered and expanded edition includes four bonus tracks originally released as singles: parts one and two of “Oh Well,” “The Green Manalishi (With The Two Prong Crown)” and “World In Harmony,” which is available on CD for the first time.

FLEETWOOD MAC: 1969-1972 features four complete albums – Then Play On (1969), Kiln House (1970), Future Games (1971) and Bare Trees (1972) – housed in a striking black slipcase. To ensure superb sound quality, Chris Bellman at Bernie Grundman Mastering cut the lacquers for all four albums. The records look as good as they sound thanks to authentically reproduced packages, including gatefolds for Then Play On and Kiln House and single sleeves for Future Games and Bare Trees.

The set follows the band through an early transitional period. With Kiln House, Fleetwood Mac began moving toward a more melodic pop sound on songs like “Mission Bell” and “One Together.” At the time, the band included: Jeremy Spencer (guitar, vocals, piano), Kirwan (guitar, vocals), John McVie (bass) and Mick Fleetwood (drums). Christine McVie was at the recording sessions and contributed backing vocals and the album’s cover art, but she did not join the band until shortly after the album was finished.

The band’s shift toward pop and folk styles continued on Future Games with songs like “Show Me A Smile” and “Morning Rain.” This marks the first Fleetwood Mac album with Christine McVie as a full band member as well as the Mac debut of Bob Welch on guitar.

The line-up stayed the same for Bare Trees, which boasts a consistently strong collection of songs like McVie’s “Spare Me A Little Of Your Love,” Kirwan’s “Dust” and Welch’s “Sentimental Lady.” Although Kirwan was a dominant figure during the recording, penning half of the songs, this would ultimately be his last appearance on a Fleetwood Mac album.