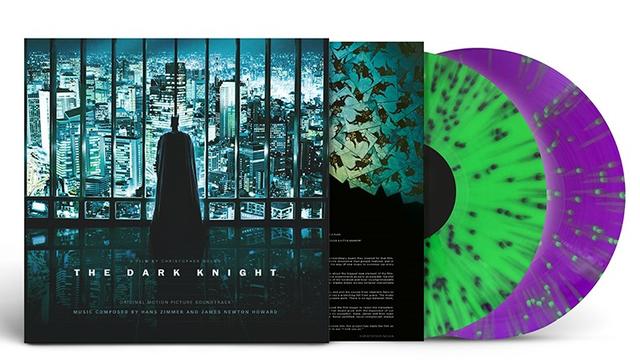 So many soundtracks, such little time. The 2021 sounds of summer soundtrack series wraps up with a comic book classic: the Grammy-award winning The Dark Knight: Original Motion Picture Soundtrack (2008). The sequel to Christopher Nolan’s Batman Begins (2005) was composed by a collaboration between Hollywood film score legends Hans Zimmer and James Newton Howard. It won multiple awards, including; winning a Grammy for "Best Score Soundtrack for Visual Media," "Best Music" at the Saturn Awards, and "Best Soundtrack" at the Brit Awards. The sweeping score was also nominated for "Best Film Music" at the BAFTA Awards. The album impacted the charts, peaking at #20 on the Billboard 200 in America. The Dark Knight: Original Motion Picture Soundtrack has been unavailable on vinyl since the original release in 2008.

Adding to the drama and gravitas of the release is the visual explosion of the 2-LP being pressed to neon green and violet splatter vinyl. The record is limited to just 14,500 copies, and retails at $34.98. Getting your hands on this instantly classic vinyl release requires connecting with a mom and pop brick and mortar indie record store near you. It's worth the trip.