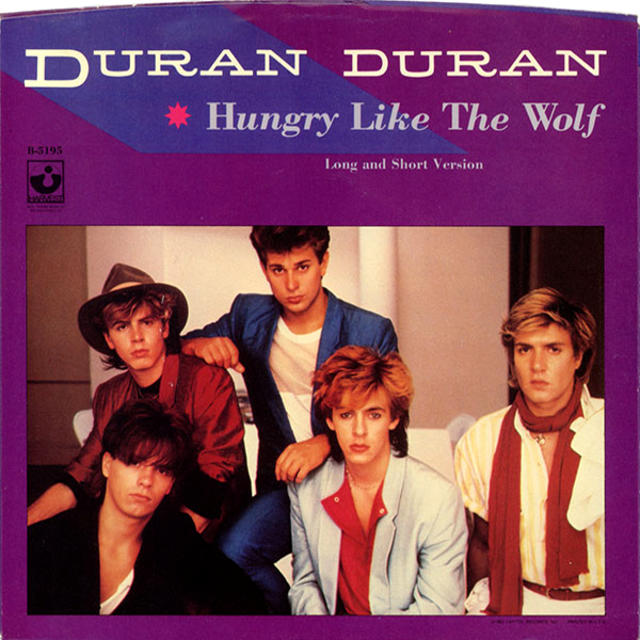 It's the song that made Duran Duran stars in America, thanks in large part to a fledgling cable network known as MTV. Only the band's fifth single, "Hungry Like the Wolf" was released on May 4, 1982. It served as the second single from the group's second album, Rio, which followed about a week later.

All these years later, it still stands as one of the most iconic and beloved tunes in the Duran Duran discography. Thanks in large part to MTV falling in love with the music video, the single peaked at #3 on the Hot 100 for the week of March 26, 1983. The two tunes ahead of Duran Duran: Michael Jackson's "Beat It" (#1) and Culture Club's "Do You Really Want to Hurt Me" (#2). Let's look back at "Hungry Like the Wolf" with five fun facts.

1. Duran Duran wrote "Hungry Like the Wolf" in something of a flash.
"'Hungry Like The Wolf' was a very easy song to write," bassist John Taylor told Complex. "That whole album--we didn't have to try too hard. We didn't have to try at all, actually. There's a time, when you are lucky enough, when your talent will sort of intersect perfectly with what's going on. You are just perfectly poised to sort of express the moment. We were definitely in that place on Rio. That song came about on a Saturday afternoon. I think Nick [Rhodes] kind of had a [keyboard] sequence in line and Andy [Taylor] had a [guitar] riff and [lead singer] Simon [Le Bon] had a phrase. And I came in and I started playing bass. [Drummer] Roger [Taylor] came in. The song was written in an afternoon."

2. There are varying opinions on what the song is about.
Singer Simon Le Bon has famously said that the lyrics were inspired by the children's tale, "Little Red Riding Hood." John Taylor is not so sure: "And what's the song lyrically about? I don't really know," he pondered. "What do you think it's about? Simon likes animal metaphors. I think it was kind of like... To me, it was like wanting to have sex with someone."

3. Keyboardist Nick Rhodes had a rough time getting to the video shoot.
The iconic music video was filmed in Sri Lanka, to capture a specific exotic spirit for director Russell Mulchahy. While most of the band headed down to make the clip, Rhodes stayed behind to put the final touches on the Rio album: "I refused to go to Sri Lanka before Rio was finished," he told Blender. "The other four went, and I stayed up all night at AIR Studios in London. I was wearing a leather outfit and went straight to the airport from the studio. After 16 hours in my leather suit, I get off the plane into a wall of heat. I stagger around the airport saying, 'Where's the limo?' and this guy takes me to a flatbed truck. I'm thinking, '20 minutes to the hotel.' It was five hours on a dust track to the beach location."

4. The video blew away MTV executives, who put the clip in heavy rotation.
"We had our weekly meeting to hear new music on Tuesdays," recalled Les Garland, who was MTV's senior executive VP. "Back then it was a fledgling industry: We'd get maybe 10 videos a week, and everyone would gather and sit through them all. I remember our director of talent and artist relations came running in and said, 'You have got to see this video that's come in.' Duran Duran were getting zero radio airplay at the time, and MTV wanted to try to break new music. 'Hungry Like the Wolf' was the greatest video I'd ever seen."

5. The videos Duran Duran filmed in Sri Lanka inspired at least one fan to travel to the original locations.
With the label spending so much on the trip, Duran Duran got three videos out of their jaunt to Sri Lanka: "Hungry Like the Wolf," "Save a Prayer" and "Lonely in Your Nightmare." The resulting imagery is an integral part of the Duran Duran legacy, and has inspired such fans as Marc Weitz to visit the country and video locations. The band shared his story on the official Duran Duran website.