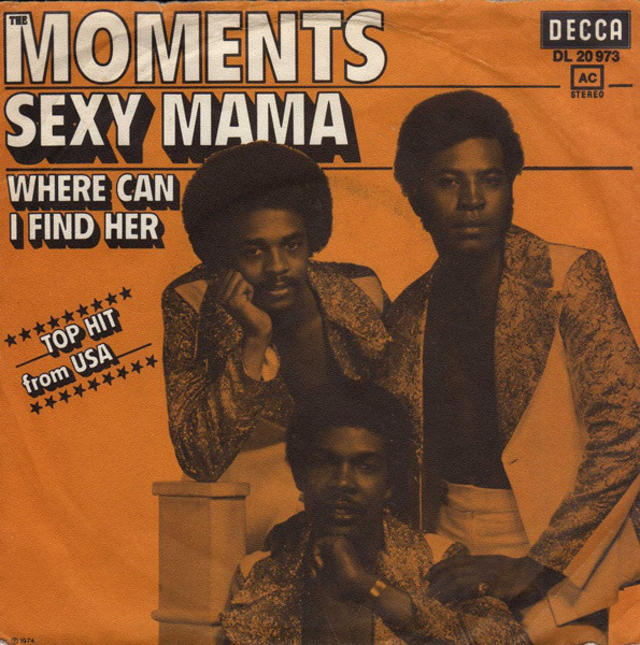 It was late 1973 when hard-working soul outfit the Moments hit the charts with the sensual seduction soundtrack, "Sexy Mama." Together since the mid-'60s, the group dutifully cranked out successful songs well into the 1970s. The year was 1970 when they scored the band's biggest hit, "Love on a Two-Way Street," the Sylvia Robinson/Bert Keyes-penned tune that climbed all the way to #3 on the Hot 100 over the week of May 30, 1970. The two songs that blocked the Moments from the top spot: Ray Stevens' "Everything is Beautiful" (#1), and The Guess Who with "American Woman"/"No Sugar Tonight" (#2).

With "Sexy Mama," the Moments captured the 1974 R&B mood perfectly, exemplified by the likes of Roberta Flack, the Spinners and the O'Jays. The sultry after-hours groove and pillow talk vocals helped propel "Sexy Mama" all the way to #3 on the Hot R&B Songs chart in February 1974. Over on the Hot 100, the tune cruised into the top 20 to peak at #17 over the week of March 16, 1974.

The life of "Sexy Mama" has been extended considerably thanks to hip-hop producers, who've sampled the track on hit songs and deep cuts. The most famous use of the track is most likely Ice Cube's "Today is a Good Day," which utilizes multiple elements from the songs. Los Angeles production guru Madlib pulled out "Sexy Mama" for the Madlib & Freddie Gibbs tune, "Later That Night."In 1976, "Sexy Mama" was covered by late vocal legend, Laura Nyro.

Rhino’s Got You Covered: The Housemartins, R.B. Greaves, The Moments, and Etta James
THIS IS THE ARTICLE BOX TEMPLATE