The One after the Big One: Chris Isaak, SAN FRANCISCO DAYS 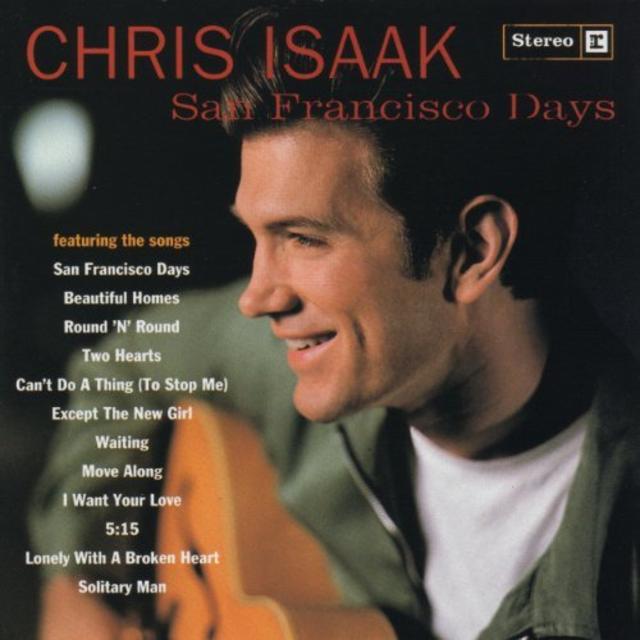 There is one man and only one man who can speak to the commercial fortunes that befall the lucky fellow who carouses on a beach with a topless Helena Christensen and the cameras rolling—that man is Chris Isaak. The sexy-beyond-words video for his 1990 song "Wicked Game" helped lift Isaak's third album, HEART SHAPED WORLD, from obscurity to triple-platinum status, and all it cost him was a day's shoot with a beautiful woman and a little sand in his britches.

The video was a one-shot deal, though, and while Isaak would have later hits, none would be as big as "Wicked Game" or HEART SHAPED WORLD. This was not for a lack of trying, or of great material. His follow-up album, 1993's SAN FRANCISCO DAYS, may surpass its predecessor in terms of quality songs and playing, though not in terms of supermodel frolicking.

The title track (which opens the record) is a ghostly, mid-tempo reminder of Isaak’s strongest attribute—that voice, warbling like Orbison, reverbed and achy-hearted. The album is full of such moments, most prominently the single “Can’t Do a Thing to Stop Me,” which seems custom-built to capitalize on the memory of “Wicked Game,” from its languid pace to Isaak’s falsetto, to the guitar’s bent notes sliding behind Isaak throughout the song. He even had a model in the video (but, alas, no sand).

“Beautiful Homes,” on the other hand, shows Isaak in rock ‘n’ roll mode, though it’s an almost elegant rock ‘n’ roll. “I love you so much,” he sings in the chorus, then changes his mind. “I love you too much.” The depth and breadth of his affection keeps him pining, and that keeps him singing; it’s a lovely circle of heartbreak. “I Want Your Love” is similarly themed, though this time expressed in a country shuffle, with Jimmy Pugh’s Hammond organ punctuating Isaak’s declarations in the middle and at the end of the song, giving instrumental voice to his desperation.

SAN FRANCISCO DAYS’ most gorgeous moment is the opening of “Two Hearts,” where Isaak, accompanied only by an acoustic guitar and a barely audible organ, sets a moody scene: “No stars in the sky,” he sings, “The night seems so dark around you.” The song then opens wide and picks up speed, the organ gains volume, and Isaak takes flight. “Love’s a heavy weight,” he admits, before asking his beloved to “Give it to me, don’t hesitate.” Then he really lifts off, going into that falsetto, up high—way up high—until you can’t believe there’s a woman alive who wouldn’t want to go up there with him.

How can anyone, for that matter, not respond to that voice? Why isn’t he still making hits today? It shouldn’t take a beach and a supermodel to recognize a grand, soulful instrument when one hears it. On SAN FRANCISCO DAYS, you hear it, and hear it often. It’s well worth checking out again.