THE ONE AFTER THE BIG ONE: James Taylor, MUD SLIDE SLIM AND THE BLUE HORIZON 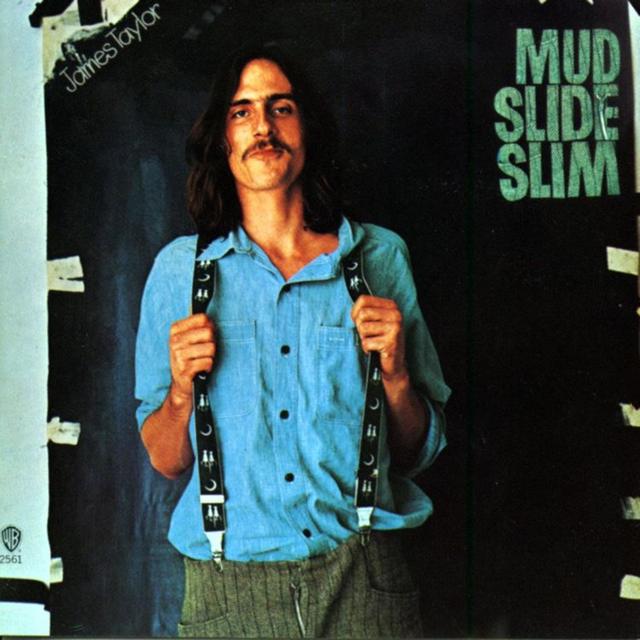 Just look at the photo of 23-year-old James Taylor on the cover of his third album, MUD SLIDE SLIM AND THE BLUE HORIZON – long-haired, mustachioed, denim-shirted troubadour, tugging at his moon-and-cat-bedecked suspenders – and recognize you are looking at the epitome of male singer/songwriter, circa 1971. This was a year after SWEET BABY JAMES had made him a star, and a year before his marriage to Carly Simon made him half a celebrity couple, when music was front-and-center in his public life (aside from a starring role in the cult classic Two-Lane Blacktop) and his heroin use had not yet become a debilitating factor in his personal life.

MUD SLIDE SLIM expands on the strengths of SWEET BABY JAMES, particularly in the melodies and arrangements Taylor and producer Peter Asher employed to bring Taylor’s songs to life.
The album is probably best known for Taylor’s take on Carole King’s “You’ve Got a Friend,” the only Number One hit of his long career (oddly enough, King’s album TAPESTRY – featuring her own take of the song – ruled the album chart in 1971, and kept MUD SLIDE SLIM stalled at Number Two). It’s a great vehicle for Taylor’s voice and acoustic guitar, a declaration of connection that oozes sincerity, as only Taylor could coax it to do.

The playing is tight on “You’ve Got a Friend” (as are the harmonies, thanks to Joni Mitchell, who was making her own classics around the same time), and throughout the album, as studio pros like bassist Leland Sklar, drummer Russ Kunkel and, in particular, guitarist Danny “Kootch” Kootchmar (an old confederate of Taylor’s) gently fill the spaces in the songs’ arrangements and make songs like “Love Has Brought Me Around,” “Highway Song” and “Long Ago and Far Away” seem simultaneously pastoral and majestic. On “Riding on a Railroad,” they are joined by John Hartford on banjo and Richard Greene on violin, the result of which is perhaps the most richly textured song on the album.
The arguable masterpiece of MUD SLIDE SLIM, though, is “You Can Close Your Eyes,” Taylor’s gorgeous paean to contentment in the midst of a love affair. The song became a standard part of his live shows and a much-beloved piece of his repertoire; the comfort of the lyrics blends naturally with the sweetness of the melody to create a classic that, while not a hit in its time, still resonates today.
Taylor’s winning streak would flag a bit over his next few records, but MUD SLIDE SLIM AND THE BLUE HORIZON is a classic piece of ‘70s singer/songwriter pop whose charms cannot be denied, and whose grooves deserve another spin on the turntable.