THE ONE AFTER THE BIG ONE: John Hartford, MORNING BUGLE 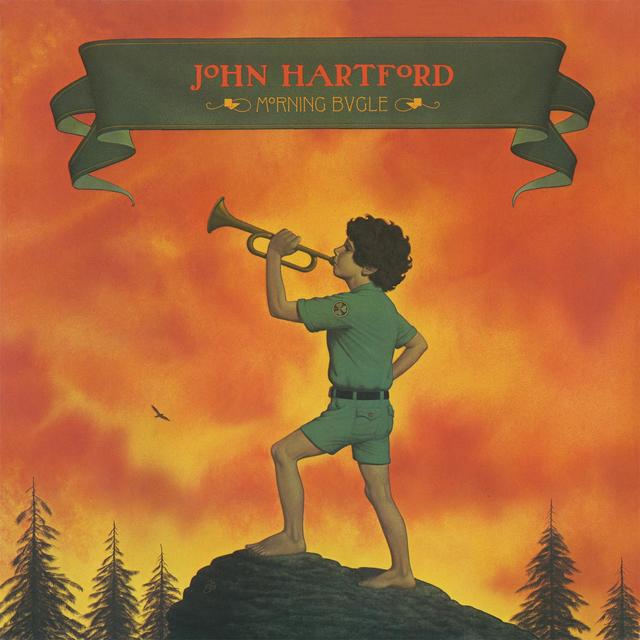 For a time in the late ‘60s and early ‘70s there were a handful of young musicians intent on preaching the gospel of country music to their peers (listeners and fellow players who were largely, if not completely, more interested in the mind-expanding rock ‘n’ roll of the period). It was not the fool’s errand some would describe it as being; some fine records emerged from these efforts, among them the Byrds’ SWEETHEART OF THE RODEO, the Nitty Gritty Dirt Band’s WILL THE CIRCLE BE UNBROKEN and the Flying Burrito Brothers’ THE GILDED PALACE OF SIN. These are classic recordings of loud, twangy goodness; without them, the early work of the Eagles, Linda Ronstadt and others would be unthinkable.

Existing along the periphery of the country youth movement was a fiddle and banjo player named John Hartford, a virtuoso instrumentalist and master songsmith who had made a name for himself as the writer of “Gentle on My Mind,” but who seemed to be most comfortable picking and fiddling in front of as many people as he could corral together in front of him. He was an essential presence in the budding “newgrass” movement that came out of the era – marked by traditional playing and untraditional material – and the man behind the release of two key albums that helped kick off newgrass. The first, the David Bromberg-produced AERO-PLAIN, was a wonder, influencing a generation of players and just crawling into the bottom quadrant of the Billboard album chart – his second release to do so.

The second key album was 1972’s MORNING BUGLE, and it’s a really good one. Cut live in the studio, allegedly with no overdubs, MORNING BUGLE finds Hartford engaging in something of a steel-string conversation with mandolin player Norman Blake, with jazz bassist Dave Holland adding in his two cents throughout.

Of course, the picking is fine throughout MORNING BUGLE. “My Rag” even has a couple changes in time signature, and hearing the interplay between Hartford and Blake is particularly satisfying. On “All Fall Down,” Hartford’s breathless vocal is at best secondary to the music, most notably Holland’s bass, which slips and slinks around the other players with ease.

Don’t think that Hartford’s lyrical concerns are secondary, though, nor his singing. On the title track, his voice is wearier than weary; “too wasted for the evenin' ride” to the next revel of the night, he settles down to “listen to the rain fall, fallin' on the earth ball.” The scene he sets is so simple, yet so evocative. On "Nobody Eats at Linebaugh's Anymore," he’s a little more didactic, bemoaning the country music industry’s abandonment of such Nashville landmarks as the Grand Ole Opry, the Ernest Tubb Record Shop and the legendary restaurant of the song’s title (whether anyone ever did abandon those or other name-checked places is up for debate).

A wonderful American music subgenre was hatched by players like John Hartford; he was and continues to be an inspiration to many fine players. MORNING BUGLE is one of those records that counts, that had an influence, that made a mark. Check it out and see why.