The One after the Big One: Led Zeppelin, HOUSES OF THE HOLY 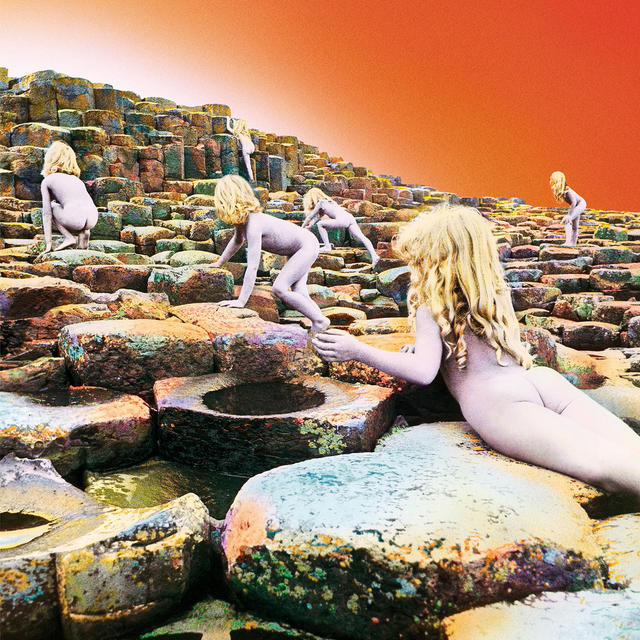 It is almost certain that Led Zeppelin did not know when they recorded LED ZEPPELIN IV (or ZOSO or UNTITLED or THE ONE AFTER LED ZEPPELIN III or whatever you want to call it), that they were making a set of timeless songs that would still resonate with listeners nearly five decades later. They were just going about their business, writing songs about sex and levees and stairways and being in a rock band. They were songs made for the stage, stages in the biggest buildings you could play back in 1971, and they were meant to reach the very back rows and nosebleed seats in those buildings. Seriously—if you were a hundred yards away and three or four stories up, you could still feel "Rock and Roll" and "Black Dog" hit you in the chest. Hard.

The band might have had a greater inkling of their own power and the lasting value of their work when they convened at an estate in Hampshire County with the Rolling Stones Mobile Studio to record 1973's HOUSES OF THE HOLY. They were the biggest band in the world and were ready to stretch out past the amped-up blues and faerie-forward Tolkien folk of previous albums, and mark a substantial move forward for their music.

They succeeded, in spades. "The Song Remains the Same" starts the album at a gallop, subsiding only when Robert Plant steps to the mic to sing. It might require a couple passes through to recognize the fact that the heaviness of the song comes from its breakneck pace and the layering of Jimmy Page's (mostly clean) guitars in the mix, not from added distortion. "The Crunge" is similarly structured, with John Paul Jones' bass pushed up in the mix, creating a kind of funk that surely surprised some fans on first listen. The band even takes a whack at reggae on "D'Yer Maker," but it's a heavy-footed reggae, thanks to John Bonham's back-line King Kong style of skins-pounding.

Not that there aren't songs that are heavy just because they're heavy. "The Ocean" is like a tsunami wave taking out a coastline, thanks to Messrs. Page and Bonham and a metric ton of amplification. "No Quarter" is epic and moody and, truth be told, a little scary (Black Sabbath scary, not Crazy World of Arthur Brown scary). And "Dancing Days" is just a great rock song, a propulsive head-nodder that to this day gets folks air drumming and smacking the steering wheel when it comes up on ye olde radio or one of those new-fangled playlist things.

HOUSES OF THE HOLY is peak-period Zeppelin, with songs that bounce as often as they smash. It is deserving of continued veneration, just as its predecessor receives.

Houses Of The Holy