The One After the Big One: Led Zeppelin, III 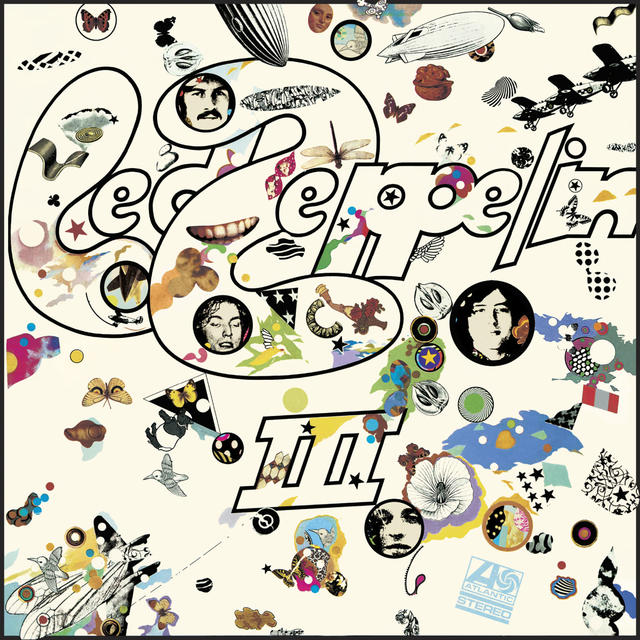 Led Zeppelin’s second record confirmed the band to be not only a top concert draw and the thunder-bringing gods of a new hard rock sound (new for 1969, at least), but also a burgeoning commercial concern, as well. The strong but unimaginatively titled II fought for the top spot on the album chart with the Beatles’ ABBEY ROAD, with each record taking turns besting the other over the course of three months at the end of 1969 and the beginning of 1970. II also gave us the mind-melting “Whole Lotta Love,” a Top Five hit and Zeppelin’s biggest single.

The band followed up their chart topper by scaling things back a bit, and finding even more power by doing so. Guitarist Jimmy Page and singer Robert Plant had enjoyed dreamy, psychedelic folk albums by the likes of the Incredible String Band and Pentangle (guitarist Bert Jansch, in particular), as well as the acoustic guitar recordings of fingerpicking master John Fahey. Page and Plant’s compositions for the third album took on a more pastoral tone, with tracks like the sweet, 12-string strummer “That’s the Way” and the sleepy “Tangerine” emanating from writing sessions in the tranquil Welsh countryside.

That’s not to say that all the acoustic material on III was bathed in such tranquility. “Bron-Y-Aur Stomp" is a front-porch blues song with locomotive momentum, even with little percussion (just handclaps and John Bonham on spoons. That’s right ‒ spoons). "Hats Off to (Roy) Harper" has no percussion at all ‒ just Page’s wild slide playing and a keening Plant vocal. And the harrowing “Gallows Pole” takes an ages-old folk theme and Zeppelin-izes it, with acoustic and electric instrumentation and Bonham’s inimitable thump.

Of course, this is Led Zeppelin, so there is much to bang one’s noggin to. III starts out with the over-the-top Vikings-are-coming crush of “Immigrant Song,” with Plant’s instantly recognizable battle cry and the entire band’s explosive energy. That energy shoots through “Celebration Day” and “Out on the Tiles” as well, giving those who bought the record to rock a reason for repeated plays.

Those are the kind of songs people expected to hear from Zeppelin ‒ hard rock, with Page, Bonham, Plant and bassist John Paul Jones striking out with power and electricity. That they delivered those as well as a collection of wonderful acoustic songs set up all kinds of fresh avenues for them, and made possible the varied sounds of their next record, the classic LED ZEPPELIN IV.