THE ONE AFTER THE BIG ONE: Rascals, ONCE UPON A DREAM 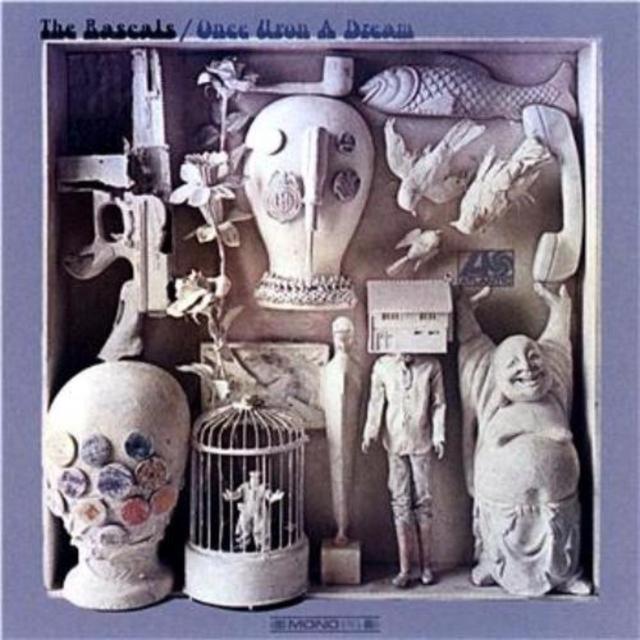 Much has been made about the back-and-forth one-upmanship between the Beatles and the Beach Boys in the mid- and late-Sixties, how records like the latter’s SUMMER DAYS (AND SUMMER NIGHTS) had informed the former’s RUBBER SOUL, which, in turn, had begat PET SOUNDS, with that classic influencing REVOLVER and also, eventually, SGT. PEPPER’S LONELY HEARTS CLUB BAND. Nothing like a little friendly creative competition to provide fans with the soundtrack of their lives, right?

Not as much attention has been given to what that psychedelic bridge between Southern California and London did to the other bands plying their craft at the time. The Young Rascals – soon to be known as simply The Rascals – had touched up their heavy soul sound with a bit of psych on their biggest record, 1967’s GROOVIN’, but were determined to expand their palette even further on their next record, 1968’s ONCE UPON A DREAM. That new focus proved successful on all levels.

“Easy Rollin’” sets up a positive vibe for the album, with a sentiment similar to “Groovin’” (“I feel like I've been dreaming and freelance scheming / On colored rainbows … You never see me worry no more”), with Buddy Lucas’ harmonica punctuating the verses. “It’s Wonderful” keeps up the light mood, with snippets of sound effects and instrumental asides hidden in the mix.

Those pinpoint moments – when a heretofore unheard brass instrument comes to the fore, or a sitar, or a tabla – are the things that mark the record as “psychedelic.” “I’m Gonna Love You” is an old-school Young Rascals soul song, layered atop a brass oompah-oompah accompaniment that gives the song another dimension, like the woodwinds did in the Beatles’ “When I’m Sixty-Four” or the calliope sounds in “Being for the Benefit of Mr. Kite.” The brass in “Silly Girl” deepens the mix, while the sound of a woman laughing drops in to add a trippy counterpoint to the instruments; if you sit back and follow the song, though, it sounds like the Rascals just being the Rascals – a great band in new clothes.

In fact, “Sattva” is virtually the only song that seems lysergically touched from beginning to end – it’s got a “Within You Without You” or “Tomorrow Never Knows” vibe, only with Eddie Brigati and Felix Cavaliere singing. It blends into “Finale: Once Upon a Dream,” which closes the album with orchestral flourishes and a grandiose vocal that would seem suitable delivering a Broadway show-stopper.

ONCE UPON A DREAM’s influences are clear, but like other, better-known albums that arrived in SGT. PEPPER’s wake (Jefferson Airplane’s AFTER BATHING AT BAXTER’S comes to mind, as does the Zombies’ ODESSEY AND ORACLE), at heart, its sound is undeniably that of the artists rendering it. The Rascals were still the Rascals – still great, still soulful. They were trying a trend on for size, and they made a pretty terrific album in the process. Check it out and hear for yourself.

Once Upon A Dream