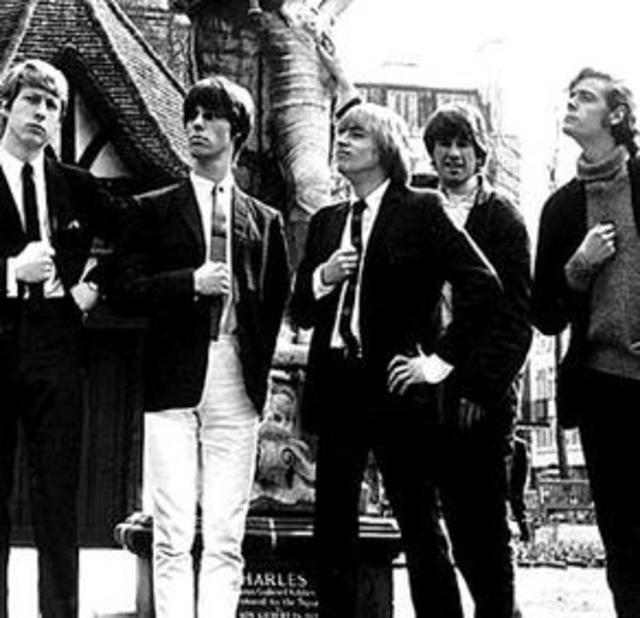 In addition to their six Top 40 songs, the Yardbirds will be remembered as having produced the top three English blues-based guitarists of the '60s: Eric Clapton, Jeff Beck and Jimmy Page.The Yardbirds formed in June 1963, with Keith Relf on vocals and harmonica, Chris Dreja on guitar, Jim McCarty on drums, Paul Samwell-Smith on bass and Anthony "Top" Topham on guitar. That October, Topham was replaced by Eric Clapton. The group was originally called the Most Blueswailing Yardbirds, and their repertoire consisted entirely of blues cover songs. Their following increased when they replaced the Rolling Stones as the house band at the Crawdaddy Club in Richmond, Surrey, England.The group's first solo album, For Your Love, was released in the U.S. in August 1965. The title track reached Number Six on the U.S. charts. Later that year, the group released Having a Rave Up. By the time of that album's release, Clapton had quit the band, and he only appeared on four tracks. He eventually joined John Mayall's Bluesbreakers.Clapton initially recommended that the group hire Jimmy Page as guitarist, but Page was hesitant about giving up his lucrative studio work, and he recommended his friend Jeff Beck. Beck played his first gig with the Yardbirds in May 1965. His innovative playing, with fuzz tone, feedback and distortion, altered the Yardbirds' sound, and the group began to experiment with various European and Asian styles ("Still I'm Sad," "Turn into Earth," "Hot House of Omagarashid," "Farewell," "Ever Since the World Began") .Beck played lead guitar on several Yardbirds' hits, including "Heart Full of Soul" (Number Nine, 1965), "I'm a Man" (Number 17, 1965), "Shapes of Things" (Number 11, 1966) and "Over Under Sideways Down" (Number 13, 1966). The group played its first U.S. tour in August 1965. Three more U.S. tours took place during Beck's tenure with the band.In the summer of 1966, bassist Paul Samwell-Smith quit the band to focus on record production. He went on to produce such artists as Carly Simon, Cat Stevens and Jethro Tull. His replacement was Jimmy Page. After Page's arrival, rhythm guitarist Dreja switched to bass, and Page and Beck both played lead guitar. This lineup can be seen in Michelangelo Antonioni's film Blow Up. The Yardbirds performed "Stroll On," a re-working of "Train Kept a-Rollin'." The Beck-Page lineup recorded little else in the studio and no live recordings of the dual-lead guitar lineup have surfaced (save a scratchy cover of the Velvet Underground's "I'm Waiting for the Man"). The Beck-Page Yardbirds also recorded a commercial for a milkshake product, "Great Shakes," using the opening riff of "Over Under Sideways Down." That was about all this version of the Yardbirds recorded. But Beck and Page did record one song with John Paul Jones on bass, Keith Moon on drums and Nicky Hopkins on piano. The song was called "Beck's Bolero," and it was inspired by Ravel's "Bolero." The song was the B-side of Beck's first solo single, "Hi Ho Silver Lining." It also appeared on Beck's first album, Truth, in 1968.As a Yardbird, Beck had been missing many shows due to health problems, and he wound up leaving the band in November 1966. The Yardbirds carried on as a quartet, and in 1967 they released another LP, Little Games. Additional singles were released, but they didn't do well. Finally, on July 7, 1968, the group played its final show at the Luton College of Technology in Bedfordshire, England. After that, the Yardbirds disbanded. Relf and McCarty formed a folk duo called Together, which was followed by Renaissance and, later, Armageddon. Page formed the New Yardbirds; that group eventually mutated into Led Zeppelin. Chris Dreja became a photographer, and shot the band photos for Zeppelin's eponymous debut. Relf died of an electric shock at his home on May 14, 1976.Despite their relatively brief career, the Yardbirds had a major impact on rock and roll. According to Rolling Stone, the group "virtually wrote the book on guitar-oriented, blues-based rock and roll. They were a crucial link between mid-Sixties British R&B and late-Sixties psychedelia, setting the groundwork for heavy metal."