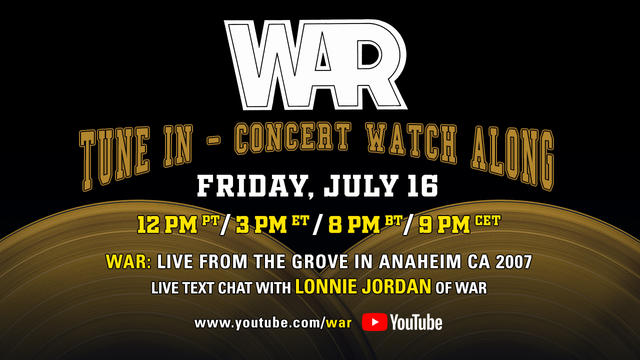 Get ready to go to WAR. The legendary Long Beach funk-rock legends have announced a special watch-along concert event for this Friday, July 16. Watch the band's concert live from The Grove in Anaheim, CA in 2007 on YouTube with WAR fans and the band! Lonnie Jordan will be live in the text chat answering your questions about the band, the show, the songs, anything you want to know. The concert will be aired multiple times throughout the day. Get more details in the video below.

The watch-along event will get fans in the mood to hit Record Store Day 2021 Drop #2, which kicks off on Saturday, July 17, at indie music shops around the world. For WAR, that means the release of the LIMITED EDITION set WAR: The Vinyl 1971-1975. It's an exclusive color vinyl boxed set celebrating the 50th anniversary and the first five classic albums from WAR (following the departure of their former lead-singer Eric Burdon). The set showcases WAR’s best-loved albums; WAR, All Day Music, The World Is A Ghetto,Deliver The Word, and Why Can’t We Be Friends. Each album will be pressed on vinyl for the first time since its original release. Strictly Limited to 5,000 exclusively for Record Store Day 2021.

Now Streaming: WAR, GET DOWN
THIS IS THE ARTICLE BOX TEMPLATE