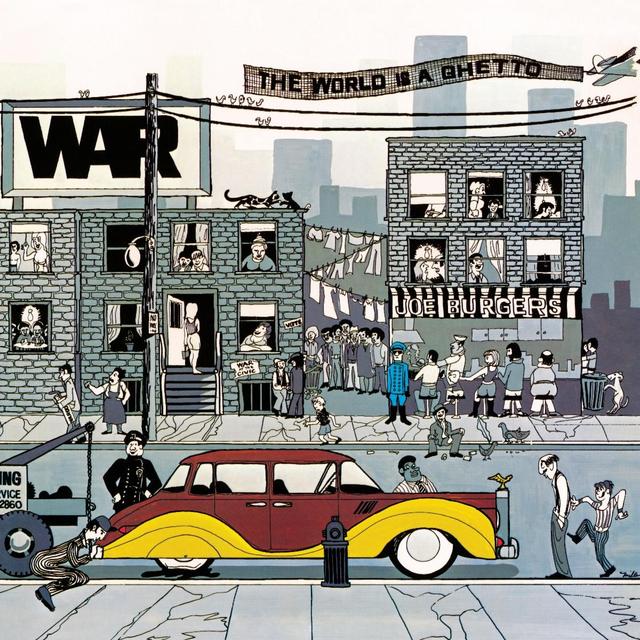 WAR released one of the biggest records of its revolutionary career 50 years ago this month with The World Is A Ghetto, which went on to become Billboard’s best-selling album of 1973. To honor the incredible achievement of this funky masterpiece, Avenue/Rhino has released a new Dolby Atmos mix of The World Is A Ghetto today. LISTEN NOW. The celebration will continue in 2023 with WAR tour dates and other surprises.

The World Is A Ghetto came out in November 1972 and was the third studio album released by the multi-ethnic SoCal group following the departure of founding singer Eric Bourdon in 1971. A crossover sensation, the album topped the pop and R&B charts and went on to sell millions of copies worldwide. The album also launched an extended period of creative and commercial success for WAR that includes 17 gold, platinum, or multi-platinum albums.

It is fitting that The World Is A Ghetto’s 50th-anniversary anniversary lands during Hip-Hop History Month, since the decades that followed the album’s release have seen WAR’s music become an inexhaustible source of inspiration for R&B and hip-hop artists. Samples taken from songs on The World Is A Ghetto have appeared on music by a range of artists, including A$AP Mob, Scarface, Geto Boys, Janet Jackson, DJ Shadow, and a classic hip-hop collaboration between Method Man, Redman, and Cypress Hill.

It includes all three albums WAR recorded with Eric Burdon: Eric Burdon Declares War on transparent-violet vinyl, Black Man’s Burdon (2-LPs) on transparent sun-yellow vinyl, and Love Is All Around on transparent red vinyl. All of these albums are being released on vinyl for the first time since the ‘70s and are mastered by Bernie Grundman. Visit www.recordstoreday.com for a list of stores participating in Record Store Day.

WAR was created in the late-1960s by producer/songwriter Jerry Goldstein and British singer Eric Burdon, who was searching for new collaborators after several years with The Animals. Goldstein spotted the musicians who would become WAR playing clubs in L.A. Soon after, Burdon started playing shows with the band and clicked with the musicians, who followed his improvisational impulses with the ease of jazz masters. Originally billed as Eric Burdon and WAR, the group recorded three albums together starting in 1970 with Eric Burdon Declares “War” (featuring the hit “Spill The Wine”), the acclaimed double album, The Black-Man’s Burdon, and the 1976 vault release, Love Is All Around. Following Burdon’s departure, WAR found its own groove musically and commercially, releasing six consecutive gold-certified studio albums, from 1971’s All Day Music to 1979’s The Music Band.  In the coming year, WAR plans a The World Is A Ghetto international tour.

THE WORLD IS A GHETTO
Track Listing

Even More All Day Music: WAR GREATEST HITS 2.0
THIS IS THE ARTICLE BOX TEMPLATE