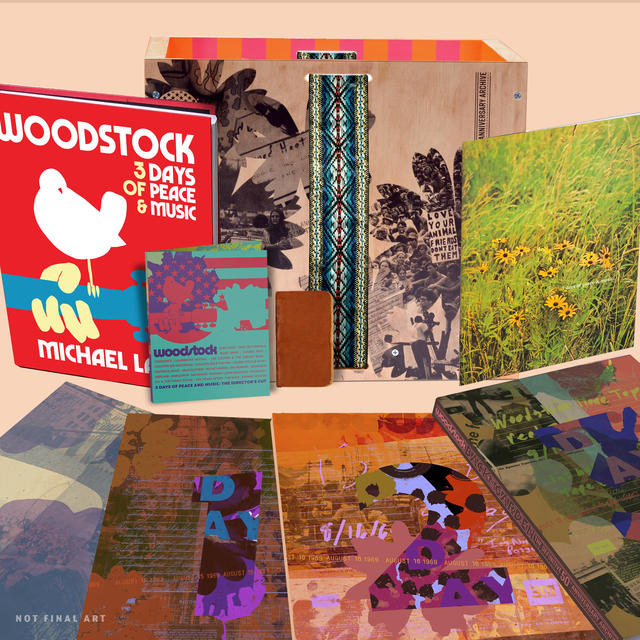 Limited Edition Collection Documents The Historic Festival In A Near

Available From Rhino On August 2

This summer will be the 50th anniversary of Woodstock, the defining event of a generation and one of the most iconic moments in popular music history. Despite its enduring cultural significance, no one has ever attempted to document the historic festival as it unfolded in real time. That is precisely what producers Andy Zax and Steve Woolard have done with a new 38-disc, 432-track boxed set that includes a near complete reconstruction of Woodstock across nearly 36 hours, with every artist performance from the festival included in chronological order. The collection boasts 267 previously unreleased audio tracks, totaling nearly 20 hours.

Limited to 1,969 individually numbered copies, WOODSTOCK - BACK TO THE GARDEN – THE DEFINITIVE 50TH ANNIVERSARY ARCHIVE comes in a screen-printed plywood box with canvas insert inspired by the Woodstock stage set up, designed by Grammy®-winning graphic designer Masaki Koike. The set also includes a Blu-ray copy of the Woodstock film, a replica of the original program, a guitar strap, two Woodstock posters, a reprint of a diary written by an attendee during the festival, two 8x10 prints from legendary rock photographer Henry Diltz, and essays by Zax, acclaimed music scribe Jesse Jarnow, and trailblazing rock critic Ellen Sander. Also included is a copy of Woodstock: 3 Days of Peace & Music (Reel Art Press), a comprehensive new hardbound book about the event written by Michael Lang, one of the festival’s co-creators. The collection will be available on August 2. Pre-orders are available now at the Rhino.com store, bundled with four exclusive 18x15 lithographs by Dale Saltzman, based on banners that were onsite at the original festival.

Rhino also will release two other collections earlier in the summer on June 28. WOODSTOCK – BACK TO THE GARDEN – 50TH ANNIVERSARY EXPERIENCE features 162 tracks across 10 CDs and is the first Woodstock collection to feature live recordings of every performer at the festival . WOODSTOCK – BACK TO THE GARDEN – 50TH ANNIVERSARY COLLECTION includes 42 tracks and will be available as a both 3-CD and 5-LP sets. The 10-disc version will also be available via digital download.

Between August 15-18, 1969, more than 400,000 people converged on Max Yasgur’s 600-acre dairy farm in upstate New York for Woodstock. Thirty-two acts performed including some of the most popular and influential musicians of the era such as Joan Baez, The Band,

The concert spawned Michael Wadleigh’s Oscar®-winning documentary as well as a pair of soundtrack albums. Together, the film and records have created a popular mythology surrounding Woodstock, one that only paints a partial picture of what actually happened. BACK TO THE GARDEN, producer Andy Zax writes in the liner notes, is intended to let people hear the festival as it really happened.

“Wadleigh’s film tells a story of Woodstock, but it doesn’t tell the story...This 50th anniversary archive — which presents nearly all of the audio from the festival in something approximating real time — tells a different kind of story. If Wadleigh’s film is a kind of psychedelic Busby Berkeley musical, Back To The Garden is an audio-verité documentary…All of the mythology of Woodstock is here in this box; or at least, everything that would eventually create that mythology. The reality is here, too. And neither invalidates the other.”

The time-consuming challenge of reconstructing the concert audio began with locating the more than 60 multi-track reels recorded by Eddie Kramer and Lee Osborne, as well as the 100 or so soundboard reels recorded by the onstage crew. Sorting through those tapes – some of which had been edited, mislabeled or lost – and then reassembling them properly was a process that, in some cases, took years to complete.

Zax says he, sound producer Brian Kehew and mastering engineer Dave Schultz avoided interfering with the tapes as much as possible in order to preserve their authenticity. “It’s not surprising that other producers’ first reaction to these tapes over the years has been ‘uh-oh,’ immediately followed by ‘we’ve gotta find a way to fix this.’ I'm not unsympathetic to that approach, but if there's a single overriding lesson that Brian Kehew and I have learned since we began working with the Woodstock tapes in 2005, it’s this: you can't fix them… That’s less grim than it seems, because once you’ve accepted the idea that there is no way to make these recordings sound slick, you realize that these tapes are the sonic equivalent of heirloom tomatoes — slightly imperfect, but delicious.”

In some cases, however, they needed to take advantage of new technology to perform much-needed restorations that would not have been possible just a few years ago. Zax says: “The only surviving recording of Ravi Shankar’s Woodstock performance…is a mono reel with less than optimal sound. But the breakthrough de-mixing process developed by James Clarke at Abbey Road Studios allowed us to isolate and extract the parts played by each instrument and then create a new stereo mix. Similarly, recent improvements in polyphonic tuning have allowed us to repair previously unfixable horn parts in the Blood, Sweat & Tears performance, allowing it, for the first time, to be heard as originally intended.”

But the Woodstock audio isn't solely about music: it’s also about the people who were there. Fortunately, the microphones were left on throughout the festival, capturing everything from stagehands discussing lunch and audience members shouting requests for baseball scores, to Max Yasgur’s uplifting address to the audience gathered on his farm.

You can also hear the cavalcade of stage announcements made by stage manager John Morris and lighting director Chip Monck, who were drafted as emcees for the festival because no one hired one. On all three of these new anniversary collections, you can hear them between songs making announcements about everything from lost keys to warnings about “flat blue acid.” The final disc in the 38-disc box serves as an appendix and contains ancillary recordings and a few bits of audio whose placement within the sequence could not be confirmed.

As the cliché goes: If you can remember the 1960s, you weren’t there. BACK TO THE GARDEN provides a way for people who weren’t there to remember them. And for anyone who was there, perhaps this will jog their memory.

WOODSTOCK - BACK TO THE GARDEN – THE DEFINITIVE 50TH ANNIVERSARY ARCHIVE

Includes Full Performances by the Following Artists (In Chronological Order)

WOODSTOCK – BACK TO THE GARDEN – 50TH ANNIVERSARY EXPERIENCE

4. “With A Little Help From My Friends”

7. It seems there are a few cars blocking the road – John Morris

1. Somebody, somewhere is giving out some flat blue acid – John Morris

7. It's a free concert from now on – John Morris

13. Let's just make the festival, not the other stuff – John Morris

16. He already had a very, very good hunger strike going

19. That brings us fairly close to the dawn – John Morris

20. I guess the reason we’re here is music – John Morris

1. Can those of you in the back hear well? – Chip Monck

12. “Rainbows All Over Your Blues”

6. If things aren't going well for you or whatever – Chip Monck & Hugh Romney

9. Can we have a little juice on this other microphone, please? – Bob Hite & Chip Monck

1. We'll take care of that right away – Chip Monck

2. “Theme For An Imaginary Western”

7. So many people have been able to participate in such a debacle – Ken Babbs

6. Just in case you should get any ideas about leaving – Chip Monck

8. Are you supposed to be up there rapping? No, man. – Abbie Hoffman & stagehand

6. We got a whole lot of orange and it was fine – Grace Slick

11. This is the largest group of people ever assembled in one place – Max Yasgur

16. “With A Little Help From My Friends”

7. Come down and say hello to us – Chip Monck

5. It just doesn't seem to be necessary – Chip Monck

11. Thank you for making all this possible – Chip Monck

WOODSTOCK – BACK TO THE GARDEN – 50TH ANNIVERSARY COLLECTION

3. We’ve got the keys to your house – John Morris

5. “I Put A Spell On You” – Creedence Clearwater Revival

8. Medley: “Dance To The Music>Music Lover>I Want To Take You Higher” – Sly & The Family Stone

11. “Somebody To Love” – Jefferson Airplane

1. I think you people have proven something to the world – Max Yasgur

2. “With A Little Help From My Friends” – Joe Cocker

3. Looks like we’re gonna get a little bit of rain – John Morris

12. It’s been a delight seeing you – Chip Monck