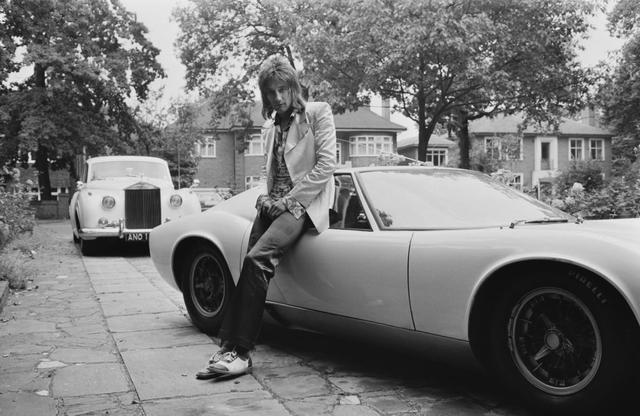 Today we celebrate the birthday of Roderick David Stewart, better known as Rod, a man who’s been a superstar for so many years at this point that you might think you already know all there is to know about him. Hey, you might be right! But we’ll know for sure after you make your way through the following five factoids.

1. He was raised on the music of Al Jolson.

Stewart’s family members were fans of Jolson’s music, which led Stewart to become a fan himself, collecting his albums, seeing his films, and reading about his life and times. Indeed, Stewart has acknowledged that his performing style and his attitude toward the audience were both derived from Jolson.

2. In his pre-success days, he did a stint working at a cemetery.

For many years, it was said that Stewart was actually a gravedigger, and even though Stewart heard it said more than a few times, he finally admitted in his 2012 autobiography that the whole story had gotten a bit overblown. Yes, he did work at a cemetery, but he only measured out plots with string, and he only did it for a couple of Saturdays before calling it quits.

3. He contributed vocals to a song by the GTO’s.

If you don’t know who the GTO’s were, allow us to explain: their name was an acronym for Girls Together Outrageously, and they were a musical collective whose members included Miss Pamela (Des Barres), Miss Mercy (Fontenot), Miss Cynderella (a.k.a. Cindy Cale-Binion), Miss Christine (Frka), Miss Lucy (McLaren), Miss Sandra (Harris), and Miss Sparky (a.k.a. Linda Sue Parker). As Wikipedia puts it, “The members were connected by their association with [Frank] Zappa, who encouraged their artistic endeavors despite their limited vocal skills,” but Zappa wasn’t the only music legend involved in their lone album, 1969’s PERMANENT DAMAGE. In addition to Stewart, who can be heard on the song “The Ghost Chained to the Past, Present, and Future (Shock Treatment),” Davy Jones, Lowell George, Russ Titelman, Nicky Hopkins, Ry Cooder, and Jeff Beck all played a part in the album’s construction in one way or another.

Stewart and Womack had been friends for years – if they hadn’t been, it’s likely that Stewart’s transgression of borrowing the melody from Womack’s “If You Want My Love (You’ve Gotta Put Something Down On It)” for “Do Ya Think I’m Sexy?” wouldn’t have been forgiven so easily – but it took some effort for Womack to get Stewart to sing on a track on RESURRECTION…until, that is, Womack actually got past Stewart’s team and was able to ask Rod himself. “There were people everywhere trying to stop it from going down,” Womack told the Chicago Tribune in 1994. When Rod heard about it, though, he told his people, “I’m doing this. I owe him; I owe him a lot. You mess around and I’ll do two songs instead of one.”

5. He entered the Guinness Book of World Records for staging the largest free rock concert attendance in history.

Picture it: New Year’s Eve, Copacabana beach in Rio, 1994. Stewart’s on the stage, playing a free concert for a crowd that he knew was big, but he had no clue just how big. “You couldn’t see past the first 30 rows,” he told the BBC in 2014. “I didn’t know until the next day that we played to that many people. I thought it was maybe a hundred thousand.” In fact, there were 4.2 million people in attendance. Not too shabby.