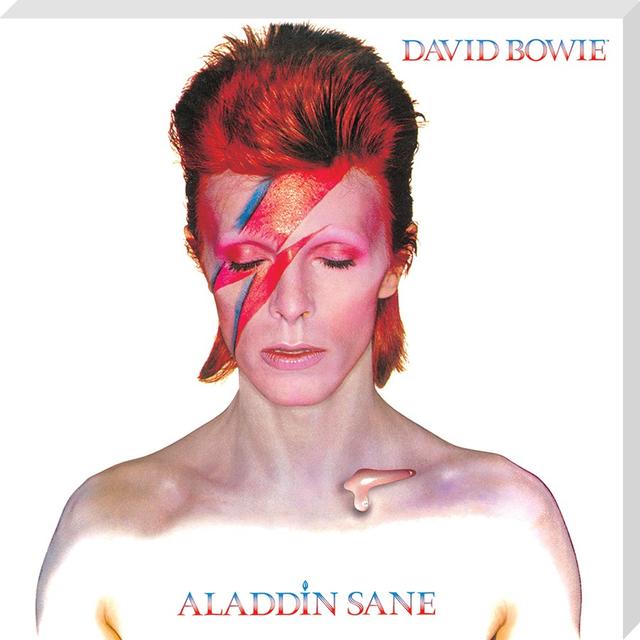 The year was 1973, and new British import David Bowie had begun to achieve star status in America. Bowie's 1972 full-length, The Rise and Fall of Ziggy Stardust and the Spiders from Mars, was a breakthrough in the States, spinning off radio hits including "Suffragette City," "Starman" and "Ziggy Stardust." As he toured the States in support of Ziggy, the profound experience influenced his songwriting, which was happening between shows. With a dose of inspiration from the Rolling Stones (Exile on Main St. was released in May '72), Bowie was moved to rough up the sleek Ziggy sound with a harder edge for his next LP.

Hitting the recording studio between tour legs in late 1972, the first fruits of Bowie's labor came in the form of lead single, "The Jean Genie," released in November of that same year. The song's blistering guitar riffs and strutting rhythm drove it up the charts, with the track peaking at #71 on the Hot 100 for the week of December 23, 1972. The #1 song in America that week: Billy Paul's "Me and Mrs. Jones." Over in the UK, "The Jean Genie" charged all the way to #2 on the Singles Chart.

Bowie took a radical turn with the follow-up, the brilliant "Drive-In Saturday," released as a single in early April 1973. Originally written for Mott the Hoople, Ian Hunter and company turned the tune down, unable to get a handle on the song's complexity. The rejection stung the artist, who recalled on VH1's Storytellers that he drunkenly shaved his eyebrows after the song was rejected, joking "that taught them a lesson."

"It's about a future where people have forgotten how to make love, so they go back onto video-films that they have kept from this century," Bowie told the audience at Cleveland's Public Auditorium in November 1972 before one of the first live performances of the track. He allegedly also asked anyone recording the show to to leave, as he was about to play new music. "This is after a catastrophe of some kind, and some people are living on the streets and some people are living in domes, and they borrow from one another and try to learn how to pick up the pieces." While the song failed to chart in America, it peaked at #3 in the UK. In Ireland, the tune climbed as high as #14.

It was sometime in April 1973 (April 13 is the date most commonly listed, while Bowie scholars have the release date as April 19), when David Bowie released the Aladdin Sane album (that same day, the third single from the set, the Mike Garson piano-powered ballad, "Time," was also released). The album helped solidify Bowie's growing star status, selling enough copies in America to peak at #17 on the Billboard 200 for the week of June 16, 1973. The #1 album in the country that week: Paul McCartney & Wings' Red Rose Speedway.

"I wasn’t at all surprised Aladdin Sane made my career," Bowie told Cameron Crowe for Rolling Stone in 1976. "I packaged a totally credible plastic rock star – much better than any sort of Monkees fabrication. My plastic rocker was much more plastic than anybody’s."

FUN FACT: The iconic cover of Bowie's Aladdin Sane record was the most expensive ever produced at the time. Shot by Brian Duffy, an unprecedented seven-color process (four-color was the standard at the time) drove costs through the roof: ‘(Bowie's manager) Tony Defries commissioned it through [his company] MainMan Productions," remembered Duffy's studio manager, Francis Newman. "I don't think there was any budget as such. Tony just told Duffy to get on with it. Duffy told the story that Tony wanted it to be as expensive as possible to commit RCA into promoting it. Certainly it was [expensive] because the dye transfer print was incredibly expensive, about £1,000, which given that our day rate at the time was about £300 – that’s a lot of money."

FUN FACT #2: The contact sheet containing the original cover photograph as well as outtakes is currently up for auction. It's estimated to sell for anywhere between $20,000 and $30,000.