April 1984: Twisted Sister Fight Authority and Win with "WE'RE NOT GONNA TAKE IT" 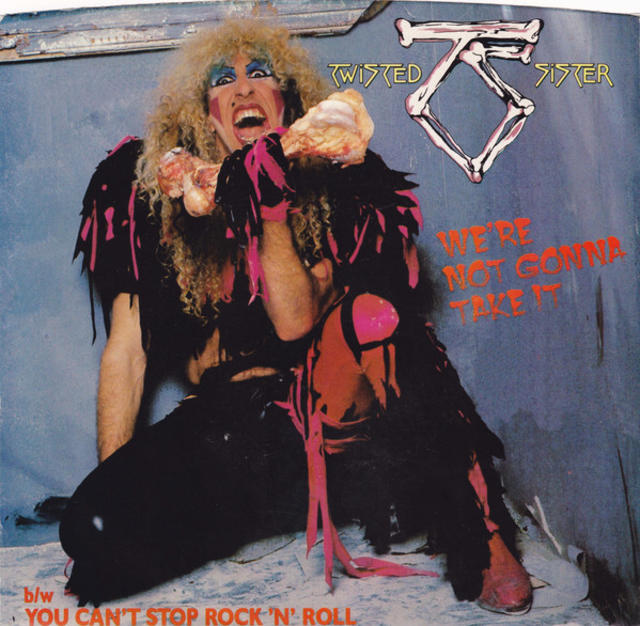 Rock 'n' roll made its name on rebellion. From its earliest origins as "race music" when the likes of pioneers Little Richard and Chuck Berry laid the foundations for rock by barnstorming America with their wild new sound, all the way up through heavy metal and hip-hop, giving it back to authority and living life on your own terms has maintained its grip on the ethos. For Dee Snider and Twisted Sister, it was a one-way ticket to stardom.

"'We're Not Gonna Take It' was influenced by a lot of different things, like the Sex Pistols and Slade and bands like that," Dee Snider told Songfacts about the genesis of the track that made his band famous. "But I had the hook for that song in 1980, so I always laugh when people say, 'Oh, that's when Twisted sold out.' I say, 'Yeah, 1980 when I had absolutely nothing and I was broke, I wrote that hook.'"

Rising '80s rockers Def Leppard (and some analytics) played a part in the track's development as well after Snider found himself having a case of writer's block: "I couldn't finish the song. I could never figure out how to write a verse for it. And in studying some of Mutt Lange's work with Def Leppard, I saw that a number of their songs were using variations on the chorus as a verse. I said, Oh, that's interesting. Why don't we try doing something with that. And that gave me the information I needed to come up with the rest of 'We're Not Gonna Take It,' and hence that song has done pretty well."

Released as the lead single from Twisted Sister's third studio LP, Stay Hungry, on April 27, 1984, "We're Not Gonna Take It" was the breakout hit the band was looking for. The song charged up the Billboard charts, very nearly cracking the top 20 when it peaked at #21 over the week of September 22, 1984. The #1 song in America that week: John Waite's "Missing You." It's a surprisingly low charting for a tune that was ubiquitous throughout 1984 and deep into 1985 and beyond.

"I always said that the job of the songwriting should be to create something that people can interpret and put their own situation into and read their own concerns or passions or worries," Snider explained of the track's enduring appeal. "Not to be super specific."

It's the general nature, Snider continued, that gives the song its lasting power: "That was always key for me with lyrical content. So with 'We're Not Gonna Take It,' whether I was singing about my parents, my teachers, my bosses, my peers, people around me, I felt it was important not to define it by actually naming names and singing, 'Dad, you're so trite and jaded, I hate my teachers, too.' And thus, the song has had a life in sporting events, at political rallies, at protests, pretty much anybody who's not taking something from somebody else, they're going to break into 'We're Not Gonna Take It' all over the world."

Snider is even more correct that he'd like to be with that statement, as "We're Not Gonna Take It" has been adopted as an anthem for American anti-vaxxers, much to the singer's chagrin. He's taken to social media to decry such applications of the tune early and often.

You're not welcome. They don't speak for me and my song was never intended to represent the bullshit they're selling. https://t.co/yAHamQQCh0

'You're not welcome," he posted in response to a tweet "thanking" him for the song while shopping without masks on during the pandemic. "They don't speak for me and my song was never intended to represent the bullshit they're selling."

The song's other notable influence: Christmas hymn "O Come All Ye Faithful," which "We're Not Gonna Take It" is modeled after. So much so that the band used the song as the basis of a very special Twisted Sister take on the Xmas classic.

Rhino Factoids: That Time Twisted Sister Sold Out The New York Palladium
THIS IS THE ARTICLE BOX TEMPLATE