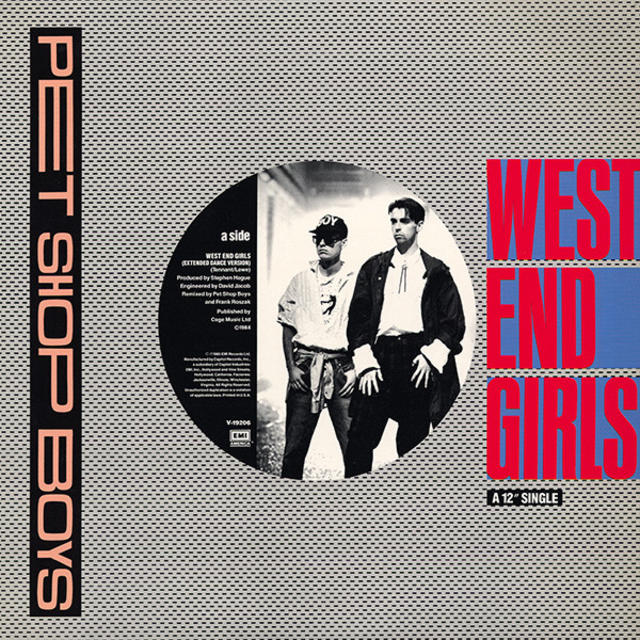 According to Neil Tennant, "West End Girls" was a confluence of influences that all came together at just the right time.

"We arrived in the studio, and (famous hi-NRG producer) Bobby O had programmed Michael Jackson's 'Billie Jean' drum pattern," Tennant said in the book, 1000 UK #1 Hits. "Chris (Lowe) started to play along and I started playing chords. In terms of the lyrics, the inspiration for 'West End Girls' came from 'The Message' by Grandmaster Flash. I remember once staying at my cousin's house in Nottingham, and we were watching some kind of gangster film with James Cagney, and just as I was dropping off to sleep, the lines 'sometimes you're better off dead, there's a gun in your hand and it's pointing to your head' came into my head, and I thought, 'that's quite good,' so I went off to find a pen."

The original version of "West End Girls" was released in April 1984, going on to become a underground dance club hit around the world. The song got so big that the group realized it was time to take their music to a major label. Landing a deal with Parlophone Records, Tennant and Lowe re-recorded "West End Girls" with producer Stephen Hague, famous for his work with acts such as New Order and Erasure.

"We added a lot more incidental noises - we had a general theory at this point that we wanted to make music that sounded filmic," Tennant explained in the liner notes accompanying the 2001 reissue of debut album, Please. "We wanted to bring real sounds into the music, so our suggestion was to record people walking down the street at the start. We recorded traffic as well. At the start you can hear what Stephen Hague recorded walking down the street outside Advision studios with a DAT."

"Helena Springs has got one of my favorite female backing voices of all time," chimed Lowe, referencing the song's memorable background vocal melodies. "I told her what words to sing and suggested the tune to her. She's got a fantastic, magisterial voice," Tennant continued. "Then we added the trumpet solo, which is played by Stephen Hague on an Emulator trumpet sample."

The updated version of the track was released as a single in October 1985, and began a steady chart ascension. The song's enigmatic lyrics and icy production style captured and defined a moment in time unlike few other tracks in 1986.

Debuting on the Hot 100 at #71, "West End Girls" peaked at #1 for the week of May 10, 1986. The song held the top spot for a single week, toppled on the following chart by Whitney Houston's "Greatest Love of All." The song's popularity was enough to earn the band a invitation to perform on legendary TV show, Soul Train.

Over in the United Kingdom, "West End Girls" topped the singles chart for the week of January 5, 1986, holding onto the top spot for two weeks in a row.

"It was meant to be about class, about rough boys getting a bit of posh. It's opposites - west/east, lower class/upper class, rich/poor, work/play. And it's about the idea of escape," Tennant revealed. "There is a huge thing about escaping in our songs. I put in the bit about Russia because I've always been interested in Russian history, and the idea was that the song went from west to east - 'from Lake Geneva to The Finland Station', which is the historic journey Lenin made in a sealed train. Chris and I used to love the West End of London near Leicester Square because you'd get a lot of skinheads, and you'd get posh girls. We used to go out nightclubbing a lot, and we'd go to The Dive Bar in Gerrard Street, which is mentioned in the song. It was in a basement, and it was damp down there, and there was no one in it apart from a couple of queeny guys talking to the barman - but it used to fascinate us."