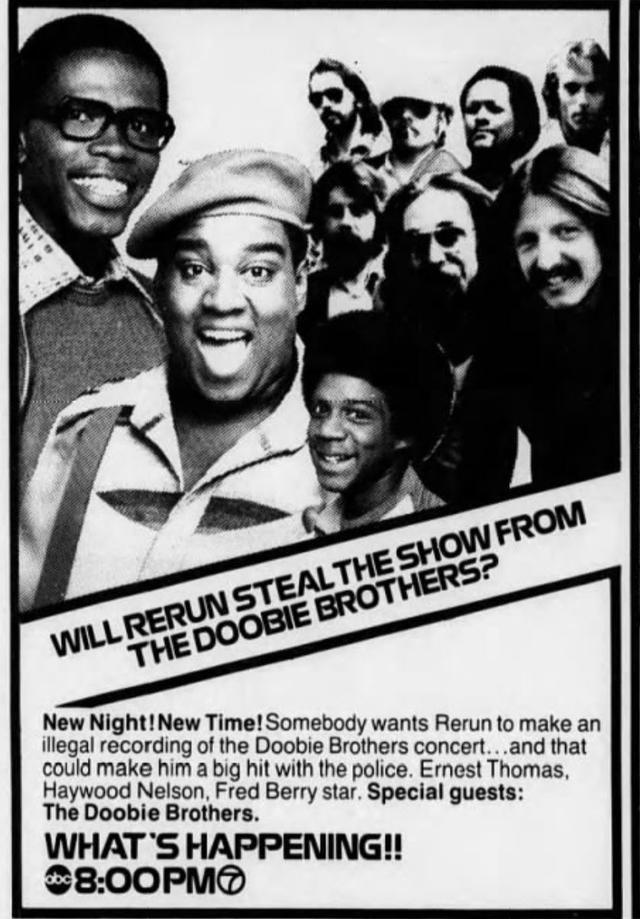 There was no more impactful or memorable musical moment on prime-time TV all year than the night of January 28, 1978. That's the night when none less than the Doobie Brothers appeared on the first of a two-episode arc on the wildly popular show What's Happening!! From the classic "Which Doobie you be?" phone call to the moment Rerun was caught bootlegging the Doobies' show (he was dancing too hard, natch), the appearance helped make the band a household name all across America.

"We had done the albums Takin’ It to the Streets and Livin’ on the Fault Line, and had just hired a new publicist named David Gest, who would later leave PR and go on to marry Liza Minelli," guitarist Patrick Simmons recalled in 2018. "A few months into working with us, David came in and told us there was an opportunity to do this situation comedy.

"I was already familiar with What’s Happening!!, because I’d watched the show a few times. I thought it was hilarious and really liked the character of Rerun (Fred Berry). I had actually met Fred one summer at a show we’d done where he was dancing with The Lockers. Because it was a black situation comedy, I thought it would be an adventurous thing for us to do because our music had always been laced with R&B and soul. Not only would our fans tune in, but it would also expose us to a new audience of people who watched the show regularly, and would begin to listen to our music. I had no idea how we would fit into the show but thought it was something fun and different to do. David had great ideas, and that was certainly one of them."

The Doobie Brothers performed a wide selection of songs over the course of the two episodes. Raj, his sister Dee, Rerun and Dwayne attend a soundcheck during which The Doobies play "Echoes Of Love" and a cover of Marvin Gaye's "Little Darling (I Need You)" from 1977’s Livin' On The Fault Line. The main concert footage features renditions of hits "Black Water" and "Takin' It To The Streets," as well as another Motown gem, "Take Me In Your Arms (Rock Me A Little While)" and the instrumental outro of "I Cheat The Hangman."

The shows were packed with iconic moments, from Rerun getting busted with a massive tape recorder he was wearing to bootleg the show (at the behest of unscrupulous character, "Al Dunbar"), to Raj's comical phone call to the group's hotel room. Watch it below.

"We had been ripped off more than once, so we were certainly aware of it," Simmons said of concert bootlegging in the 1970s. "I remember at the time, there was a lot of stealing of intellectual property going on. People would record shows and then sell them to some label in some other country. Then the label would produce it and ship it back to America. It was a difficult process trying to get in and record a show without being seen, but there was a certain amount of money to be made. It’s silly looking back on it now, because everyone is recording shows on their phones and giving it away on YouTube, but it was a different world in those days."

Once Upon a Time in the Top Spot: The Doobie Brothers, MINUTE BY MINUTE
THIS IS THE ARTICLE BOX TEMPLATE