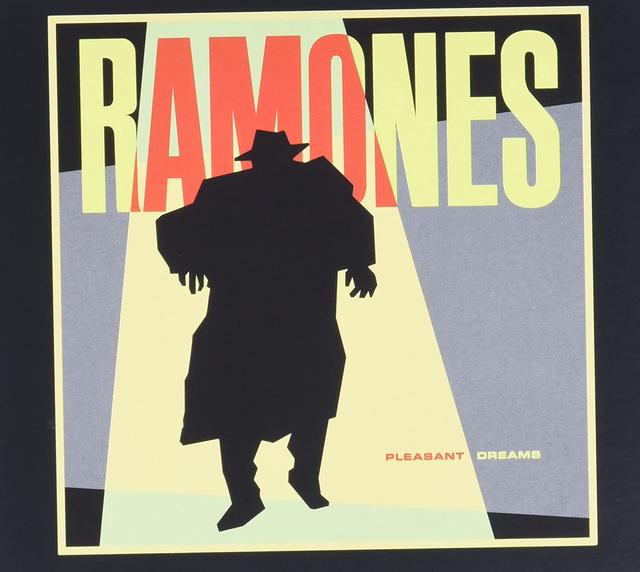 The year was 1981, and the Ramones were at yet another crossroads. The band's most recent full-length, End of the Century, had paired the punk outfit with legendary (albeit mentally unstable) "Wall of Sound" producer, Phil Spector. The volatile combination resulted in the Ramones' highest charting album in America, peaking at #44 on the Billboard 200 for the week of March 28, 1980. The #1 album in the country that week: Pink Floyd's The Wall, which was in the middle of an epic 15-week run in the top spot. Still, the charting and sales were light years behind what the band and its label was hoping to achieve.

"Radio just turned into a big business," singer Joey Ramone groused on The Tomorrow Show to guest host Kelly Lange, who was filling in for regular Tom Synder (as fans of the show, Ramones weren't happy that Snyder himself wasn't there for the interview). "It's pushing mediocrity. All they care about is money now. Take the '60s. It was definitely the most innovative time in the history of rock 'n' roll and radio, where they played everything, and they looked for new things to play, and the DJs were the hip people, and they turned us onto the Beatles and various people like that. I mean, nowadays, the DJs could care less. It's just a salary. Radio's totally sterile."

"We don't need it though," countered Dee Dee Ramone. "We haven't had it, and we're getting along just fine without it," he added to cheers from the clearly pro-Ramones audience. "Just because there is no radio doesn't mean kids have to be stuck with mediocracy (sic)... they just have to discover things on their own, whether it's us or anyone else."

That push-pull dynamic between the band craving mainstream success, yet defiantly soldiering on without it became a defining characteristic of Ramones. The band was on The Tomorrow Show to promote 1981 album, Pleasant Dreams, another attempt at cracking through from punk icons to chart-climbing rock stars. As such, the label denied the group's frankly sage idea of having Steve Lillywhite produce the album (he was fresh from producing U2's groundbreaking debut, Boy). Instead, the band was paired with Graham Gouldman—songwriter and musician for British '70s hit-makers 10cc—to oversee the making of the record.

“Working with Graham was easy, in that he was always a gentleman, but I knew going in that Pleasant Dreams wasn’t going to be the type of album I wanted,” Johnny Ramone revealed after the fact. “It really could have used another two or three punk songs. All I wanted to do was keep our fans happy and not sell out. I was fighting within the band. They were trying to go lighter, looking for ways to be more commercial. I was against the band doing that.”

The resulting album, Pleasant Dreams, was released on July 20, 1981. The LP was announced by lead single and opening song "We Want the Airwaves," a menacing rock tune with a catchy chorus that had been finely polished for radio play; the track didn't even register on the Billboard Hot 100.

“I loved the sound, and I loved a lot of the songs,” drummer Marky Ramone shared in his book, Punk Rock Blitzkrieg: My Life As A Ramone. “'It’s Not My Place (In The 9 To 5 World)' sounded radio ready, even if radio wasn’t willing. I loved the Bo Diddley feel of the drums and the change to a straight beat in the break, which gave it the sound of an early Kinks or Who song. Motown and [Phil Spector] Wall Of Sound imprints were all over 'Don’t Go,' 'You Sound Like You’re Sick' and 'She’s A Sensation.'”

The album's third and final single, "The KKK Took My Baby Away," has been the subject of much conjecture. Ramones' longtime tour manager, Monte Melenick, implied that it was Joey's way of dealing with his girlfriend, Linda Daniele, leaving him to date and subsequently marry guitarist Johnny Ramone. Joey's brother, Mickey Leigh, however, has gone on record to say that the song was about the singer's real-life tale of falling for a black woman in high school, much to the consternation of his parents.

Handcuffed by lack of radio play or mainstream exposure, Pleasant Dreams made an admirable chart run, peaking at #58 on the Billboard 200 for the week of September 19, 1981. The #1 album in America that week: Rolling Stones' Tattoo You.

"I love Pleasant Dreams," Marky Ramone insisted in the book Hey Ho Let's Go: The Story of the Ramones. "I love the production. It was the Ramones during their pop-punk era, and I like pop-rock a lot -- catchy tunes, things with lots of minor chords. And that album had it. End of the Century should have sounded like that. There are demos around."

FUN FACT: In the documentary End of the Century: The Story of the Ramones, Johnny Ramone reveals that the guitar riff of "The KKK Took My Baby Away" was inspired by the Cheap Trick song "He's a Whore," found on the band's self-titled 1977 debut album.

Deep Dive: Ramones, END OF THE CENTURY
THIS IS THE ARTICLE BOX TEMPLATE